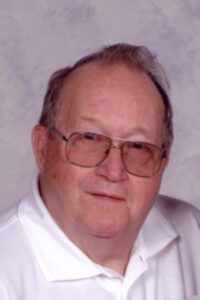 Kennedy Robinson, 81, lived in Osceola, Indiana, all of his life, until moving to Plymouth’s Riverwalk Retirement Homes in October of 2010. He died of natural causes at 9:30 am at the Hospice House in South Bend on Tuesday, February 14, 2012.
Kennedy was born on September 15, 1930 in Mishawaka, Indiana. He was the son of Arthur Harry Robinson and Marjorie Louise (Kennedy) Robinson.
He graduated from Mishawaka High School with the class of 1949.
On October 29, 1950, in the Osceola United Methodist Church, Ethel and Kennedy Robinson., high school sweethearts, were married. Ethel preceded in death on August 27, 2011.
In 1952 Kennedy enlisted in the US Army and served our country for 2 years.
Kennedy worked at Radio Equipment Company of South Bend and Adams & Westlake in Elkhart in sales, retiring in 1993. Retirement allowed him and Ethel to camp all over the country which they both enjoyed. For many years, 1993 to 2010, they wintered in Arizona.
He was a volunteer fireman with the Osceola Department for over 30 years and after retirement he worked summers at the Mishawaka Parks Department.
Kennedy was a member of the Osceola United Methodist Church for over 60 years. He was also, a member of the American Legion, a life member of Good Sam Club, and a member of the Carriage Travel Club.
Surviving is his son and daughter-in-law, Kennedy “Ken” and Sharen Robinson, Plymouth; grandson Brian Robinson and his fiancée Sara Keefe both of Plymouth and granddaughter, Jennifer Robinson of Indianapolis. A sister, Polly Robinson of Mesa, Arizona also survives.
Preceding Kennedy in death were his parents, his wife, and two sisters; Marjorie Robinson and Shirley Barnes.
The family will receive friends on Friday, February 17, 2012 from 4 – 7 p.m. in the Johnson-Danielson Funeral Home, 1100 N. Michigan Street, Plymouth. Services will be held in the Chapel Hill Mausoleum, Chapel Hill Cemetery, 10776 McKinley Hwy, Osceola on Saturday, February 18, 2012 at 11 a.m. with calling one hour prior to the service in the chapel. Pastor Bob Hargis will officiate.
Entombment will follow in the Chapel Hill Mausoleum.
Memorial gifts in Kennedy’s name may be made to the American Cancer Society, 601 W. Edison Road, Mishawaka, IN 46544 or Center for Hospice Care, 112 S. Center St. Plymouth, IN 46563.