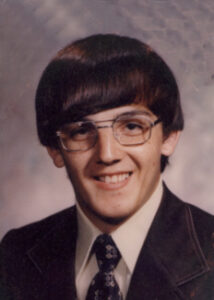 Kenneth D. “Butch” Howard, 55, a resident of Pilgrim Meadows, passed away Thursday evening surrounded by family, after battling cancer for nearly three years. As a child he fought off illness and refused to be labeled sick. He will be remembered for his smile, quiet demeanor and care for others
Butch was born in Ary, Kentucky on May 23, 1956, the son of Lloyd D. and Phyllis L. (Hensley) Howard. They moved to the Marshall County area and Butch attended Triton High School and I.T.T. in Ft. Wayne completing courses in drafting and engineering.
Very well known for being a hard worker he first worked for the McCord Corporation in Plymouth as a design engineer. Butch was gifted at taking an idea and having the vision to create it – as with many powered products that he worked on in the family business; Buckeye Powered Parachutes in Argos.
Butch was a family man who was well entrenched in his faith and belief in his Savior Jesus Christ. He was a member of The Church of Jesus Christ in Argos where his father pastors.
As he was committed to his family he was committed to the sport of running and he did so every day for over 20 years. From an early age horses were a big part of his life and past-time and he would have made a good cowboy. He also enjoyed gardening and the game of baseball. He had a passion for singing and playing the banjo as well.
Butch is survived by his parents, Lloyd and Phyllis of Argos and his maternal grandmother, Maudie Hensley also of Argos.
His loving wife; Deanna (Gonzalez) who he took as his bride on December 29, 1979 in Argos survives with their four children: Natasha L. (Arthur) Bonebrake of Hobart, IN, Ashley A. (Taylor) VanLandingham of Lawrence, KS, Wyatt I. Howard and Kendra D. Howard both at home. Grandchildren include: Payton, Isaiah, Isaac and Valerie.
Butch’s siblings are: Ralph E. Howard, Anthony W. (Lisa) Howard, Christopher L. (Jane) Howard and Jacqueline E. (Harold) Vires all of Argos.
Numerous aunts, uncles, nieces, nephews, cousins and friends including his devoted pet Bart all survive.
He was preceded in death by his maternal grandfather, Willard Hensley and paternal grandparents, Shelby and Anna Howard.
Visitation will be held on Sunday, February 26th from 3 – 7 p.m. in the Johnson-Danielson Funeral Home, 1100 N. Michigan St. Plymouth. Services will be held in The Church of Jesus Christ, 15676 Michigan Road, Argos on Monday, February 27th at 1 p.m. Visitation will continue one hour prior to services in the church. Butch’s father Lloyd and brother Tony will preside.
The family would request in lieu of flowers memorial gifts be made to The Church of Jesus Christ, P.O. Box 67, Argos, IN 46501