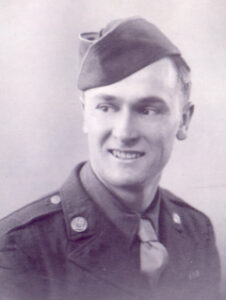 Kenneth Eugene Ritenour, 89, died in his residence at 5:40pm on Tuesday, May 24, 2011.
Kenneth was born in Tippecanoe, Indiana, the son of Frank and Mary Eversole Ritenour on October 3, 1921.
He graduated from LaPaz High School in 1939.
Ken and Marie Hummel were married in LaPaz, Indiana on February 9, 1942.
An Army veteran in WWII, he served his country honorably from September 1942 until is honorable discharge in September 1945. He was awarded with the Bronze Star. A farmer, his greatest joy was being outside with nature and working the land. He and Marie enjoyed traveling and seeing the country.
Kenneth worked as a security guard from 1967 to 1984 for R.R. Donnelly.
He served on the Marshall County Farm Bureau Co-Op for six years and was the chairman of the Bourbon Township Farm Bureau for years.
Ken attended the Church of the Brethren in Bremen.
Kenneth is survived by his devoted wife of 69 years, Marie, and by their daughter and son-in-law, Beverly and Greg Samons of Austin, Texas.
A grandson, Steve (Kari) Samons of Ft. Wayne and their daughter’s, Samantha and Katelin Samons, survive as well.
A sister, Edna (Meryl) Swihart of Plymouth and a sister-in-law, Mildred Ritenour of Etna Green, together with several nieces and nephews, also survive.
Kenneth was preceded in death by his parents and two sons, Larry and Ervin. Three brothers, Andrew, Russell and Elmer and two sisters, Ruth Jackson and Edith Hess have also died.
Visitation at the Johnson-Danielson Funeral Home, 1100 N. Michigan St., Plymouth, will be on Friday, May 27, 2011, from 10 to 12 noon.
Funeral services will be conducted by the Rev. Mike Overpeck, of the Bremen Church of the Brethren, at noon, following visitation.
Burial will be in the Sandridge Cemetery, Bourbon.
Military rites will be accorded to Kenneth by the Plymouth American Legion Post 27, VFW, DAV, and the South Bend Honor Guard.
Memorial contributions may be made to The Center for Hospice Care 112 South Center Street Plymouth, IN 46563 or to The Bremen Church of the Brethren 921 Woodies Lane Bremen, IN 46506.