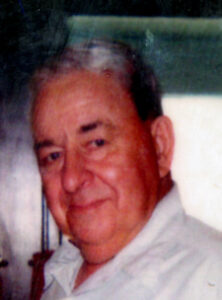 Kenneth Harrington, 91, 11385 13th Rd., Plymouth, died of natural causes at Miller’s Merry Manor, Plymouth, at 5:00 a.m. on Monday, April 20, 2009.
It is said of Kenneth that he was a kind, thoughtful man and never did anything to hurt anyone.
Kenneth was born on August 11, 1917, in Plymouth. He was the son of Theodore and Mary Alice Harrington.
He attended school in Inwood.
Kenneth served his country in the United States Army in World War II.
On October 30, 1949, in Bremen, IN., he and Onie Belle Speegle were married.
Kenneth worked at Uniroyal in South Bend for 40 years, retiring in 1981.
He loved to hunt, fish and trap and was still cutting fire wood at 88-years-old. He was a true sportsman and outdoorsman. Kenneth is survived by two sons and a daughter. They are Kenneth L. Harrington, Rochester, and Jon E. Harrington, Plymouth. His daughter, Alice K. Harrington, lives in Cocoa, Fla.
Three grandchildren and four great-grandchildren also survive.
Kenneth was preceded in death by his parents, his beloved wife, Onie, who died in 2003, Roger D., and two brothers, Ralph and David Harrington.
Friends are invited to visit with the family on Friday, April 24, 2009, from 10 to noon at the Johnson-Danielson Funeral Home, 1100 N. Michigan St., Plymouth.
Funeral services for Kenneth will follow the visitation in the funeral home at noon. The Rev. Chuck Krieg will officiate. Military graveside services will be accorded by the Plymouth American Legion Post 27 in the New Oakhill Cemetery, Plymouth.