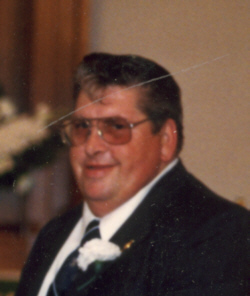 Kenneth E. Ludwig, 66, of 413 Charles St., died of natural causes in Memorial Hospital, South Bend, at 1:40 p.m. on Friday, May 7, 2010.
Kenny was born in Argos, IN., on January 25, 1944. He was the son of Francis “Abe” and Sarah Hiland Ludwig. He attended Argos High School after high school he joined the Army for three-years serving from 1962 to 1965.
On March 2, 1968, in the First United Methodist Church of Plymouth, Kenny and Sandra Klapp were united in matrimony.
Kenny worked for the City of Plymouth in the Sanitation Department for eight years and then for 18 more years as a purchasing agent of cleaning and automotive supplies. Prior to his service for the city, he drove a semi truck for Espich Trucking.
He loved working in his yard and just being outdoors. Most of his spare time was spent helping other people.
Kenny enjoyed watching racing, golf and cooking for his family and got great enjoyment playing with his grandson, Bryce. He also enjoyed listening to Elvis Presley.
He was a Blueberry Festival volunteer for over 25 years, setting up and cleaning up the premises. He had a great sense of humor. He called himself “the head garbologist” of the 18-member team that kept the 100-plus acres of Centennial Park spotless and trashless for the four days of the festival.
When you asked Kenny “how’s business?” he’d always say, “it’s picking up!”
Kenny is survived by his wife Sandra, Plymouth, a daughter, Tammy Ludwig, also of Plymouth and a son, Brian Ludwig of Fort Wayne.
His grandson Bryce Ludwig, Plymouth, survives as well along with two sisters: Martha (Richard) Muffley, Plymouth: and Irene Creighbaum, Tippecanoe.
A half brother, David Ludwig, Bremen, and a half-sister, Frances Ann Dorsey, Argos, together with two stepsisters, Mary Helen Devos, Argos, and Sue Feagles, Florida, and a step brother, Charles Kring, Elkhart, also survive.
Kenny is preceded in death by his parents, a step sister and two step brothers, Donna, Michael and Bobby.
Friends are invited to celebrate Kenny’s life with his family on Tuesday, May 11, 2010 from 3 to 7 p.m. in the Johnson-Danielson Funeral Home, 1100 N. Michigan St., Plymouth. Funeral services for Kenny will be held immediately following visitation at 7 p.m., May 11, 2010, in the funeral home. Pastor Charles Krieg will officiate. Military honors, performed by Plymouth American Legion, Plymouth VFW and DAV will be accorded to Kenny at the funeral home.
Memorial gifts may be given in Kenny’s memory to the cancer, diabetes and mental health associations.