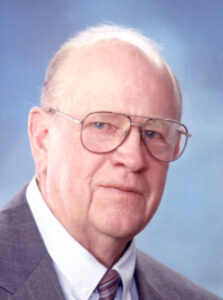 Kenneth L. “Ken” Ringer, a month shy of his 81st birthday, died at home, 14321 Nataka Trail, Plymouth at 6:30 p.m. on Monday, April 13, 2009.
A lifetime resident of Marshall County, Ken was born in Marshall County on the family farm on May 22, 1928. He was the son of Russell H. and Clara B. Milner Ringer. He graduated from Plymouth’s Lincoln High School with the class of 1946
On May 15, 1950, in Plymouth, Ken and Dorothy Blakeley were married.
A self-employed 4th generation farmer, his passion in life was watching things grow.
He never really retired from farming; he kept working until the time that he became sick in August 2008 at the age of 80. He and his family were members of the Trinity United Methodist Church.
Ken is survived by his devoted wife, Dorothy, and by their four children. They are David “Dave” C. and Cheri Ringer, Sharon D. and Jim Stewart, Andy S. Ringer, all of Plymouth, and Richard “Rich” A. and Sherry Ringer of Bourbon.
Four grandchildren, Josh (Rachel) Stewart, Adam Stewart, Abbey Stewart, and Aimee Ringer also survive, together with a brother and sister-in-law, Ralph R. and Rose Ringer of Plymouth, along with several nieces and nephews.
Ken was preceded in death by his parents.
There will be no services. The Johnson-Danielson Funeral Home, 1100 N. Michigan St., Plymouth, is assisting the family.
Memorial gifts in Ken’s memory may be made to the Center for Hospice and Palliative Care or to the charity of the donor’s choice