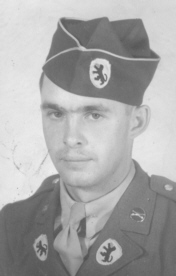 Kenneth O. Henry, 93, a former resident of Thayer St. Plymouth, passed away at 4 p.m. on Tuesday, January 22nd in the Bremen Health Care Center.
Kenneth was born in Winamac, Indiana on November 25, 1919, the son of Omer and Nellie (Hodge) Henry. He attended Winamac Schools and on March 27, 1942 he set off to serve in the United States Army – 11th Airborne Division attaining the rank of Staff Sergeant. It was on February 16th, 1945 as a Squad Leader in the Philippines that he was wounded under enemy fire and received a Purple Heart. He was honorable discharged on October 20, 1945.
He took as his bride, the former Mildred M. Lidgard. They would become the parents of four children. She proceeded in death on November 2, 1989.
Kenneth worked had worked for Schlosser Bros. and then Hawthorn-Mellody before Wheelabrator-Frye in Mishawaka for 16 years and retired in 1981.
He loved to fish, time spent with family and working on cars.
Surviving are three children; Kenneth J. (Linda) Henry of Georgetown, Kentucky, David A. Henry of Bremen and Pat A. Dillard of Travelers Rest, South Carolina. Eleven grandchildren and seven great grandchildren also survive along with one sister, Jean Hickman.
Kenneth was preceded in death by his spouse, one son Charles R. Henry, a daughter-in-law, Marsha Henry, three brothers and three sisters.
The family will receive friends after 11 a.m. on Saturday, January 26th in the funeral home where services will be held at noon under the direction of Life Celebrant Roberta Norris. Military Honors will follow at the funeral home provided by members of the Plymouth American Legion Post 27, Veterans of Foreign Wars – Marshall County Post 1162 and the D.A.V.
Interment will be in the New Oakhill Cemetery, Plymouth.
Preferred are memorial gifts to the Wounded Warrior Project, , 230 W. Monroe St.
Chicago, IL 60606