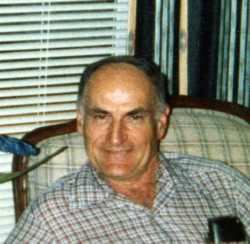 Kenneth L Roush passed away on January 9, 2021 at St. Joseph Regional Medical Center, Plymouth.  He was 90 years old.  He was born July 5, 1930, the youngest child of Melvin G Roush and Minnie Phoebe (Johnson) Roush on a farm north of Teegarden, Indiana, in St Joseph County.  He graduated from North Liberty High School in 1948.  He joined the US Marine Corps to get away from milking cows.  He served two tours of duty during the Korean War.

On July 1, 1950, he married Yolanda Arch in the “new” Our Lady of Hungary Church in South Bend.

By trade, Ken was a tool and die maker.  He worked at Singers, Studebakers, and Miles Lab in Elkhart.  In 1972, he and Yolanda tried a retail venture, but were back in South Bend by June, 1973.  On July 1, 1975, they moved to the old Paul Hiss farm at Lincoln Hwy. and Pine Road.  He worked for Haeberle Machine Shop and drove for Hoosier Tire.  He and Yolanda visited almost every state (including Alaska and Hawaii twice) during their retirement years.

Memorial contributions can be made to St. Michael’s Catholic Church, 613 N. Center St., Plymouth, IN 46563.