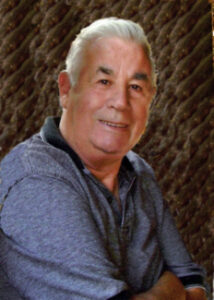 Kenneth S. Barenie, 84, passed away at his Plymouth residence following an illness, Friday evening February 28, 2014.
Kenneth was born in Highland, Indiana on August 21, 1929 to Alfred T. and Ina (Spencer) Barenie. He attended Griffith High School in Griffith Indiana.
Ken married Margaret R. “Marge” Carver on May 7, 1949 in Black Oak Indiana. Their union of marriage for 65 years created a family tree with two sons, two daughters, 11 grandchildren, 20 great-grandchildren and one great-great grandson.
Through Ken’s lifetime he worked as a carpenter and 40 years as a maintenance engineer with Ancilla Domini until his retirement at the age of 62.
Ken loved square dancing, fishing and gaming. He and Marge had traveled all over the United States but for two. The couple had spent 20 winters in southern Texas. He was a member of the parish of St. Dominic Mission Catholic Church at Koontz Lake and was also a member of the Knights of Columbus. Ken is survived by his loving wife Margaret and his children: son Daniel K. and Gloria Barenie of Berrien Springs, MI, daughter Linda T. Barenie, daughter Kathleen Rose and Rex Gilliland, and Thomas J. Barenie all of Plymouth. One brother Mervyn and one sister Rita Barenie of Griffith survives as well as many nieces and nephews.
He was preceded in death by his parents, a brother Alfred and sister Louella. Friends may visit with Ken’s family from 4 – 8 p.m. EDT on Tuesday March 4, 2014 in the JOHNSON-DANIELSON FUNERAL HOME, 1100 N. Michigan Street Plymouth, Indiana. A Rosary will be said at 7:45 p.m. in the funeral home.
Mass of Christian Burial will be at the ANCILLA DOMINI CHAPEL at 11:00 a.m. EDT Wednesday March 5, 2014 with Fr. Anthony Spanley and Fr. John Zemelko. Calling will continue at the Chapel after 10 a.m. on Wednesday.
Burial will be in the New Oakhill Cemetery, Plymouth Indiana.
Preferred are memorial contributions to St. Dominic Catholic Church Koontz Lake, 10440 E. State Road 23, Hamlet, IN 46532.