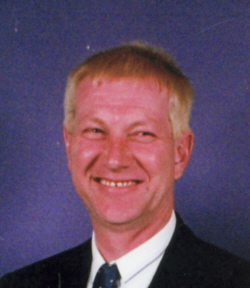 Kevin W. Fish, 54, a LaPaz resident all of his life, died at 6:12 a.m. on Saturday, July 3, 2010 at Memorial Hospital, South Bend from natural causes.
The son of Harold and Pauline J. Crum Fish, Kevin was born on January 3, 1956 in Plymouth. He was a 1974 graduate of LaVille High School.
He had worked at Gundlach Trucking before becoming the owner and operator of A & F Trucking for 22 years and was presently the Fleet Manager for United Beverage of South Bend.
An avid bowler, he had bowled at Albert’s Bowling Lanes in LaPaz, was one of the main organizers of LaPaz Park, had a fondness for his dog “Buster”, enjoyed boating, truck and tractor pulls and was an avid NASCAR fan. Kevin currently served on the LaPaz Park Board, had been a member of the Marshall County Civil Defense for over 20 years and was an honorary member of the Lapaz Fire Dept., from which he retired after serving 25 years, 17 of those years he served as the Secretary-Treasurer. He also loved to travel with friends to Las Vegas.
Kevin is survived by his sister, Karen Vosler of Dayton, Ohio, and three nieces: Barbara Paskewicz, Kristine Bauske, Cheryl Murphy and several cousins.
He was preceded in death by his parents and a brother, Kenneth Roy Fish.
Friends are invited to celebrate the life of Kevin W. Fish with his family from 4 to 8 p.m. on Wednesday, July 7, 2010, at the Johnson-Danielson Funeral Home, 1100 N. Michigan St., Plymouth.
Funeral services for Kevin will be held at 11:00 a.m. on Thursday, July 8, 2010, in the funeral home. The Rev. Stephen Cox, pastor of the Cornerstone Community Fellowship. LaPaz, will officiate.
Burial will be in Fairmont Cemetery.
Memorial gifts in Kevin’s honor may be made to the LaPaz Fire Department or the Marshall County Food Bank at the Neighborhood Center.