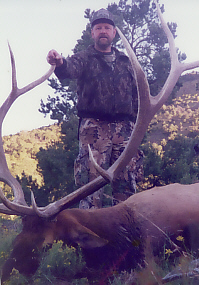 Lifetime Marshall County resident, Kim Earl Cox, 52, of Plymouth, died unexpectedly at 8:38 a.m. on Saturday, December 13, 2008, in Saint Joseph Regional Medical Center, Plymouth.
Born in South Bend, IN. on January 7, 1956, Kim is the son of Olen Earl and Shirley Mae (Lacher) Cox.
He graduated from LaVille High School with the class of 1974, and from the Indiana Police Academy in 1983.
Kim had attended the Riverside Church in Bremen and First Christian Church of Plymouth.
On February 25, 1995, Kim and Nancy J. Martin were married at home in Plymouth.
He first worked as a LaPaz Community Police Officer prior to joining the Marshall County Sheriff Dept. during Richard Tyson’s tenure as Sheriff.
Kim served in law enforcement for 25 years, retiring in 2007. He currently worked as the crib manager at I.T.Equipment in Plymouth.
Kim enjoyed his family, especially the time spent with his grandchildren and loyal dog, Earl, a Silver Labrador.
Hunting mainly with bow was his #1 interest. He enjoyed time spent outdoors in the woods, joined by his wife. He played third baseman on various fast & slow pitch softball teams in Marshall Co. for many years. A sport he did not play but followed was hockey.
He was a member of the Rocky Mountain Elk Foundation, Ducks Unlimited, The Wild Turkey Federation and the Raghorn News was his favorite newsprint. He also assisted Nancy in her career with the Marshall County Humane Society.
Kim is survived by his wife, Nancy, and by their two daughters, a son and step-children. They are Stephanie Michelle Cox and Brandon Earl Cox, both of South Bend and Kelsey Jaye Cox, Argos, a student at Purdue University. His step-son, Abe Hundt, Plymouth, also a Purdue student and step-daughter, Abby Jean Hundt, Plymouth, survive as well.
Grandchildren, Ethan Yoder, Alec Coleman and Rannelle Cox also survive together with his mother, Shirley, of LaPaz and two brothers, Jim (Barb) Cox and Steve (Denise) Cox, both of Plymouth.
Kim’s father-in-law, Lowell K. Martin of Bremen, also survives together with numerous nieces, nephews, cousins, hunting buddies and friends.
Kim was preceded in death by his father Olen, in 1998, and DeMariss Martin also in 1998.
Friends are invited to share memories with Kim’s family on Wednesday, December 17, 2008, from 3 to 8 p.m. and after 7 a.m. on Thursday, December 18th, at the Johnson-Danielson Funeral Home, 1100 N. Michigan St., Plymouth.
Funeral services for Kim will be held at 10:30 a.m. on Thursday, December 18, 2008, in the Plymouth Wesleyan Church, 11203 S. Michigan St., Plymouth. The Rev. Stephen Cox, pastor of the LaPaz Cornerstone Community Fellowship, will officiate.
Burial will be next to his father in Oakhill Cemetery, Plymouth.
Memorial donations in Kim’s memory may be made to the Marshall County Humane Society, 11165 13th Road, Plymouth, Indiana 46563.