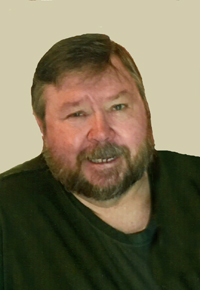 It is with great sadness that the family of Kirby Lee Whitaker, age 60, shares that he passed away unexpectedly, but peacefully, in his sleep on Thursday, August 16, 2018 at his home. He was a big guy with a big personality and an even bigger heart. Two of his biggest secrets (which, of course, everyone knew) were that, at heart, he was just a big old teddy bear and that he truly was a â€œmamaâ€™s boy.â€ He was definitely a man who loved and was loved by many. As one of his friends recently stated, â€œTo know him was to love him.â€
Kirby was born on November 23, 1957 in Albion, Michigan to Don A. (Buck) Whitaker and Lillian Lee (Harper) Whitaker. He lived most of his life in Plymouth, Indiana and was well known around town. He graduated from Plymouth High School with the Class of 1975. Kirby was a talented mason whose work can be seen in many buildings and homes in the area. He learned the trade while working for Tom Atkins Construction but eventually owned his own business, J & K Construction, in partnership with Jimmy Hickman.
On October 20, 1984 Kirby married the former Shelly Lingle, who survives. They were later divorced but remained friends. Kirby is survived by two wonderful daughters whom he loved more than anything in this world. He was so proud of both of them. They are Amanda Whitaker of Plymouth, Indiana and Allison Allen with husband, Jeff, of Rochester, Indiana. There are not enough words to describe the precious relationship that existed between this daddy and his girls. His love will live on forever in them. Amanda and Allison have two siblings who, while not biologically related to Kirby, were still loved by him as if they were his own. They are Alexia Smith of Bridgman, Michigan and Jordan Smith of Plymouth. Alexia has two children, Brayson Simon of Walkerton, Indiana and Haylin Ponda of Bridgman, Michigan who lovingly called Kirby â€œPapaw.â€
Other survivors include his five siblings: Bruce (and Linda) Whitaker of Fullerton, CA,; Shelley (and Rick) Shafer of Argos, IN; Mark Whitaker of South Bend, IN; Gayle Smith of Plymouth, IN; and Anita Spicer of Plymouth, IN along with numerous nieces, nephews, and cousins.
Kirby was preceded in death by his father, his mother whom he loved dearly, his â€œhonorary dadâ€ Gerald (â€œUnkâ€) McKeigue, his sweet Aunt Mary, his first best friend and cousin, Tim Keilman, a host of other aunts, uncles, and cousins, and two brothers-in-law, Bob Spicer and Phil Smith.
He had been a member of the Moose Lodge #741 since 1987 and a member of the American Legion Post #27 since 1996. He loved to spend time with family and friends at both establishments. He had a great sense of humor and could always be counted on to tell a good joke.
Those close to Kirby know that he was not a fan of funerals and did not want one of his own. Therefore, no formal visitation or funeral will take place. Instead, a Celebration of Life will be held on Tuesday, August 21, 2018 beginning at 2 p.m. at the American Legion Post #27 in Plymouth. Family and friends are invited to come as you are whenever you can that afternoon and/or into the evening and share a meal, memories, pictures, and time with his family. There will be no formal speaker, service, or program.
In lieu of flowers, memorial contributions may be made to his daughters to help offset the cost of final expenses