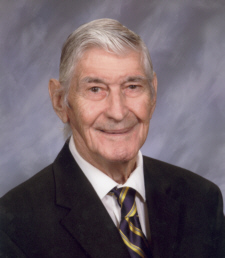 Kline Dean Irwin, 90, a long time resident of Lake of the Woods, Bremen, passed away at 4:28 p.m. on Sunday, May 13, 2012 in Pilgrim Manor Nursing Center, Plymouth. The son of Elmer and Iva Middleton Irwin, Kline was born on April 27, 1922 in Argos. He attended Argos Schools.
Kline enlisted in the U.S. Navy on August 14, 1941, serving in W.W. II. He received a Purple Heart on December 23, 1943 and was discharged on September 8, 1945.
On September 28, 1946, Kline and Eloise P. Pearson were married in Chicago, Illinois. Eloise preceded him in death on February 11, 1984.
He retired from Bremen Bearing, where he had worked as a machinist for many years.
Kline was an avid fisherman and also enjoyed hunting, gardening and tinkering with motors.
He was a member of the Plymouth Veterans of Foreign Wars Post 1162, American Legion Post 27, D.A.V., Moose Lodge and the USS Wasp Stinger Club, from which he never missed a reunion.
Kline is survived by two daughters: Pamala K. and husband Jerry of Fremont, CA and Lizabeth E. and her husband Mike of Flint Michigan; two grandsons: William Boyer and Brad Boyer; a brother, Harold Irwin and a niece, Nancy Irwin, both of Woodstock, IL.
He was preceded in death by his parents, his wife, Eloise, a granddaughter, Lyndsey Rodriguez and a nephew, Richard Irwin.
The family will receive friends at the Johnson-Danielson Funeral Home, 1100 N. Michigan St., Plymouth, on Thursday, May 17, 2012 from 4 to 8 p.m.
Funeral services will be held in the funeral home at 2:00 p.m. on Friday, May 18, 2012, officiated by the Rev. Larry Marhanka, pastor of the First United Methodist Church, Plymouth, which Kline attended. Burial will follow in the New Oakhill Cemetery in Plymouth, where military honors will be accorded Kline by members of the Plymouth American Legion Post 27, Veterans of Foreign Wars Post 1162 and the D.A.V.
Memorial gifts in Kline’s name may be made to the Plymouth Veterans of Foreign Wars Post 1162, 606 Lake Avenue, Plymouth, IN 46563.