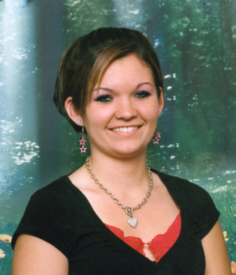 Kristy Lee Andersen, 17, a Plymouth resident all of her life, died at 7:19 p.m. on Friday, December 9, 2005 at Memorial Hospital, South Bend, from injuries sustained in an automobile accident.
Kristy, the daughter of Roy and Pamela Thompson Andersen, was born August 5, 1988, in Plymouth. A junior at LaVille High School, Kristy had been involved in many activities over the years. She had played soccer for many years, and was a soccer referee for one season and had been a member of the LaVille Band for five years. Kristy had also been a cheerleader in the 5th and 6th grades, was a volleyball manager for one season, boys basketball manager for one season, and had played in the Plymouth Soft Ball League for two years.
She was a member of Sunrise Chapel in Plymouth, where she was involved in the children’s nursery ministry.
Kristy is survived by her parents, Roy and Pam Andersen of Plymouth, a sister, Jennifer Andersen of Plymouth, and two brothers: William Kozuch of LaPaz, and James Kozuch of South Bend.
Also surviving are her paternal grandmother, Mary Andersen of Mechanicsburg, PA, her maternal grandmother, Beverly Sult of South Bend, four nieces, three nephews, and several aunts, uncles, and cousins.
Friends will be welcomed by the family from 4 to 8 p.m. on Tuesday, December 13, 2005, in the Johnson – Danielson Funeral Home, 1100 N. Michigan St., Plymouth, and Wednesday, December 14, 2005, for one hour prior to services in the Sunrise Chapel, 11802 Lincoln Highway, Plymouth.
Funeral services, officiated by Pastor Rustin Krapfl, will be held at 10:30 a.m. on Wednesday, December 14, 2005 in Sunrise Chapel.
Burial will be in New Oakhill Cemetery, Plymouth.
Memorial gifts in Kristy’s memory made be made to Sunrise Chapel’s Children’s Nursery or The Woman’s Care Center, Plymouth.