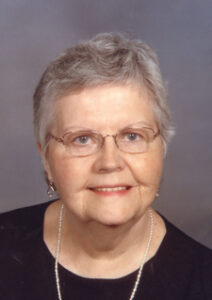 L. Charlene (Hoover) Taylor, 71, a lifetime Marshall County resident, living in the River Park Community at 805 Baker St., Plymouth, since the mid-1990’s, died, following an illness, in Miller’s Merry Manor, Plymouth, at 4:20 p.m. on Friday, July 21, 2006.
Charlene was born in Argos, Indiana on September 21, 1934, the daughter of Charles and Ruth Beam Dutro. She attended elementary school in Plymouth and high school in Tyner.
On April 15, 1951, in the Blissville Church of the Brethren, Charlene and Dale F. Hoover were married. Dale died on June 7, 1986. She later married Donald Taylor on November 9, 1991. He then preceded her in death on June 3, 1998.
In recent years, Charlene was a dedicated volunteer at Saint Joseph Regional Medical Center in Plymouth.
With her husband Dale, she enjoyed square dancing and numerous family camping trips.
Charlene is survived by a daughter and two sons. Her daughter is Sheree S. Ross of Bremen. Her sons are Dennis C. and Trudy Hoover of South Bend and Randy D. Hoover of Walkerton.
Five grandchildren survive as well. They are: Ian Hoover, Angie Schwietzer, Jennifer Criddle, Adam Hoover and Rose Ross. Four great-grandchildren also survive. They are: Noah, Nicholas, Haley and Aaron.
A half sister and half brother also survive.
Charlene was preceded in death by her parents and spouses.
Friends will be welcomed by her family on Monday, July 24, 2006, from 4 to 8 p.m. in the Johnson-Danielson Funeral Home, 1100 N. Michigan St., Plymouth.
Funeral services for Charlene will by conducted by the Rev. David Kerkove, pastor of the Plymouth Church of the Brethren where she was a member, located at 1130 N. Michigan St., Plymouth, on Tuesday, July 25, 2006, at 10 a.m. Interment will be in Morris Cemetery on Highway 6, west of LaPaz.
Memorial gifts in Charlene’s memory may be made to the Plymouth Church of the Brethren or to the National Multiple Sclerosis Society – Indiana Chapter, 7301 Georgetown Road #112, Indianapolis, Indiana 46368.