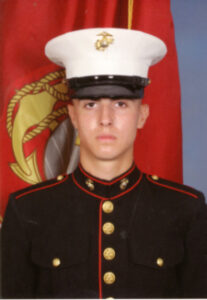 L. Cpl. Cameron M. Babcock, USMC, a lifetime Plymouth resident, died from an accidental shooting in his barracks of the 1st Marine Division at the Twentynine Palms Marine Base, California, on Sunday, January 20, 2008.
He was 19-years and 10-months old.
He will be remembered by his family and friends as a friendly young man with an incredible personality and a particular talent for music. He always gave his best and led the way.
Cameron was born in Plymouth, on March 3, 1988, the son of Jeffery A. and Ann M. Smith Babcock.
He graduated from Plymouth High School with the class of 2006. He played the trumpet in the Big Red Marching Band and was a member of the PHS Advanced Jazz Band that competed at the State Jazz Festival in LaPorte in 2005. He was also a member of the Wind Ensemble, comprised of some of the school’s top music students.
As an eighth grader he went to the State Swim meets with the Plymouth Swim Club.
Cameron had told his family and friends that he always wanted to serve his country as a United States Marine.
He enlisted in the Marine Corps on June 20, 2006, and was meritoriously promoted to Private First Class at graduation from Boot Camp. He was proud to be a Marine, serving as a rifleman in the Infantry.
Attached to Kilo Company, 3rd Battalion, 7th Marine Regiment, 1st Marine Division, Cameron had served a tour of combat duty in Iraq in support of Iraqi Freedom. He was most recently home in Plymouth over the Christmas holidays.
He was scheduled to deploy to OIF with Kilo 3/7 in the winter of 2008.
Lance Corporal Babcock earned the following awards during his 19 months of service: National Defense Service Medal: Iraqi Campaign Medal: Global War on Terrorism Service Medal: Combat Action Ribbon: Sea Service Deployment Ribbon and Certificate of Commendation.
Cameron loved music, especially rock and roll. He played guitar and enjoyed the outdoors, four-wheeling and being with his family and friends.
He attended the Plymouth Baptist Church.
Cameron is survived by his parents, three sisters and a brother. They are Kailey, Abigail, Hope and Samuel Babcock, all of Plymouth.
His maternal grandparents, Mike and Anna Smith and maternal grandmother, Judy Norton, and his paternal grandparents, Roger and Carrolyne Babcock, all of Plymouth, also survive his death.
An aunt, Cindy and Steve Odiorne, two uncles, David Smith and Jerry and Ginger Smith, all of Plymouth, survive as well, together with cousins Ben and Lauren Smith and Joel Salazar.
Friends are invited to share memories of Cameron with his family from 4 to 8 p.m. on Monday, January 28, 2008, at the Johnson-Danielson Funeral Home, 1100 N. Michigan St., Plymouth, and one hour prior to the services on Tuesday, at the Plymouth Baptist Church. Funeral services will be held in the Plymouth Baptist Church, 11345 9A Rd., on Tuesday, January 29, 2008, at 11 a.m. The Rev. Douglas Jividen, pastor of the church, will officiate.
Burial will be in New Oakhill Cemetery, Plymouth, Indiana, with full military honors provided by the United States Marine Corps.
Memorial gifts in Cameron’s memory may be made to the American Cancer Society in honor of his grandmother, Anna Smith.