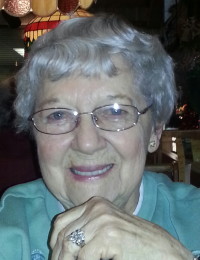 L. Irene Taylor, 93, passed away peacefully in her home on Monday, March 9, 2020; the home her husband, Walter “Mike”, began building in 1947.
She was born October 6, 1926 in Plymouth to Russell and Lily (Johnson) Lacher. Irene graduated from Lincoln High School with the class of 1944.
Irene and Mike were married at the home of her parents, on August 29, 1947 by Rev. Paul Marsh of the First Christian Church of which they were members. They shared 72 years of raising their son, Michael Lee Taylor, sharing laughs and making memories. Retiring in 1987, she worked in the same building, 121 W. Garro Street, since 1944. First working for Don Kitch, Geo Miles, Hugh Keiser, Dr. Dunfee and Dr. Plumlee, as their office secretary.
In her later years, she enjoyed ceramics; which were beautifully displayed all throughout their home. She adored her Sub Deb Club and friends of 70+ years.
Irene is survived by their son, Michael (Rosemary) Taylor; grandsons, Robby (Mirranda Muse & Ky) and Evan (Stephanie) Taylor; three step-grandchildren: Misty, Larry and Aaron; three step-great-grandchildren: Cody, Kyhl and Alex (Ashley); and sisters and brothers: Lu (Bill) Town of Bremen, Shirley Cox of LaPaz, Wayne (Joyce) Lacher of Plymouth and Larry Lacher of Plymouth. She was preceded in death by her parents, 2 brothers: Laverene & Robert, sister-in-law, Marilyn Lacher and brother-in-law, Olen Cox. Irene was left with a broken heart after Mike’s passing on December 4, 2019.
Visitation will be held on Saturday, March 14, 2020 from 11-1 p.m. at the Johnson-Danielson Funeral Home, 1100 N. Michigan Street, Plymouth. Funeral services will follow at 1 p.m. with Pastor Steve Cox officiating.
Irene and Mike will be laid to rest together in the New Oak Hill Cemetery, Plymouth.
In lieu of flowers, memorial contributions can be made to Center for Hospice Care 112 S. Center St. Plymouth IN 46563 or Cornerstone Community Fellowship-Project Fund, 4291 Michigan Road, Plymouth, IN 46563.