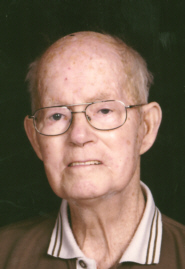 L. JACK WILHELM
March 2, 1925 – May 29, 2006
PLYMOUTH – Lewis Jack Wilhelm, 81, a lifetime Marshall County resident, died, after an extended illness, at his home, 221 North Liberty St., Plymouth, at 3:23a.m., on Monday, May 29, 2006.
A long-time civic leader, Jack always loved his family, his country and Plymouth, Indiana.
In 2001, he was honored by Gov. Frank O’Bannon with the highest award that may be given to a civilian in Indiana, a Sagamore of the Wabash
Jack was born north of Burr Oak on March 2, 1925, the son of Roscoe and Chloe Mae Johnson Wilhelm. His mother died when he was three-years-old and his father, in April of 1947.
Jack attended Burr Oak, Culver and Tyner schools, graduating from Tyner High School in 1943, where he played basketball and softball.
He worked at the Osborn Seed Co. for a short time before he joined the Navy at age 19. During World War II, he served in the United States Navy. Aboard LST 937, Jack, as a yeoman striker, made several landings in the Philippines and surrounding areas in the Pacific Theater.
Honorably discharged from the Navy, he married his high school sweetheart, Evedene Kaiser, a Teegarden native, on August 10, 1946. After working with Schlosser Brothers Creamery and later running his own milk route, Jack became a route manager in 1953, for the South Bend Tribune, distributing 5,000 daily papers to area carriers. He then became a journeyman pressman, working for 28 years on the presses of The Tribune in South Bend. After 32 years with the newspaper, he retired on December 14, 1985. Never one to sit around, after that he worked part time with the Plymouth Street Department, Delp Electric Co., Ridge Auto Parts, and finishing with Napa Auto Parts.
A staunch Democrat, Jack served 42 years as a precinct committeeman. He was elected as a City Councilman for two terms and was a member of the Plymouth Park Board for 24 years. Nineteen of those years was during the administration of Mayor Chuck Glaub.
Jack was President of the Blueberry Festival Committee in 1972, and was also a president of the Marshall County Scottish Rite, and a Past Master of the Masonic Lodge, Number 149.
He also served on the board of the Plymouth Plan Commission and the Zoning Appeals Board, resigning his appointments, because of failing health, in 2005.
An avid Plymouth High School sports fan, he has been president of the Big Red Boosters Club, as well as following the Chicago White Sox, the Chicago Bears and the St. Louis Cardinals.
An energetic person, he was a runner, participating in the Blueberry Stomp for a number of years. Before his illness, he would run five-miles a day. With a congenital cholesterol problem, and two open-heart surgeries, he attributed his longevity to being physically active.
Jack served as an elder and was a devoted member of the First United Church of Christ.
He is survived by Evedene, his devoted wife of almost sixty years and by their two children: Jackie and her husband, Rex Nifong and Scott Wilhelm, all of Plymouth. Two grandchildren, Lisa and Brian Nifong, Plymouth, and several nieces and nephews survive as well, together with a sister, Ethel Dearing, Ocala, Florida, a brother William “Bill” and Florence Wilhelm, South Bend.
Jack was proceeded in death by his half-sister, Mae Fry.
Friends will be welcomed by the family to celebrate the life of Jack Wilhelm at the Johnson-Danielson Funeral Home, 1100 N. Michigan St., Plymouth, on Thursday, June 1, 2006, from 3 to 8 p.m. and for one hour prior to services at the church on Friday.
A Masonic Lodge service will be held at 8 p.m. on Thursday evening in the funeral home.
Funeral services for Jack will be held at 11 a.m. on Friday, June 2, 2006, in the First United Church of Christ, 321 N. Center Street, Plymouth.
Full military graveside services will be accorded to Jack in the New Oakhill Cemetery, Plymouth, where he will be laid to rest. The Plymouth VFW Post 1162 and the American Legion Post 27 will do the honors.
Memorial contributions in memory of Jack may be made to his church, the First United Church of Christ, to the Marshall County Cancer Association or to a charity of the donor’s choice.