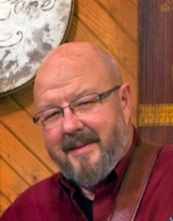 Lane A. Laffoon, 66, passed away on Thursday August 20, 2020 at St. Joseph Regional Hospital, Plymouth.
Born in Plymouth, Indiana on August 16, 1954, Lane was the son of David and Glenda (Ames) Laffoon. He graduated from Plymouth High School with the class of 1972. Lane attended Ancilla College and Indiana University South Bend. Lane married Jennifer Rice on Saturday February 14, 1976 at the First United Methodist Church in Plymouth.
Lane owned Lane’s Laundromat from 1983-1991 and worked as a Dental Technician making teeth.
He was a very gifted and accomplished musician. Known for his Banjo, guitar, bouzouki, bodhran drum and singing, he loved playing old jazz, ragtime, folk tunes and show numbers. Lane and Jennifer were members of the Round-Town-Ramblers and traveled all over the State of Indiana performing at every State Park throughout the 1980’s and 1990’s. They were both a part of the Presenter’s Touring Program sanctioned through the Indiana Arts Commission. For the past three years Lane has been an active member of The REES Project Committee, providing technical assistance in the design of the performance space. Project co-chair Randy Danielson stated, “Lane will be dearly missed. With his artistic talent he was able to re-create the large medallions that graced the auditorium when it opened in 1940 and in 2019 finished a cold cast bronze sculpture of Stewart Rees known as “Stewie”. He took a leadership role and recently headed up the Stellar Crossroads – Arts & Culture Facebook Live event in support of FUND THE ESSENTIALS in which he and Jenny were the ‘first’ to perform in The REES auditorium.”
Surviving is his wife, Jennifer of Plymouth; sisters, Valerie (Robert) Schafer of Plymouth and Jan (Daniel) Lanham of Kincaid, West Virginia; niece, Eleesha Schafer of Plymouth; nephews, Lee Schafer of Plymouth and David Lanham of Kincaid, West Virginia.
He is preceded in death by his parents and his niece Sarah Taylor.
Per the family’s wishes a celebration of life will be held at a later date.
Preferred are memorial gifts to The REES Project, c/o Marshall County Community Foundation, 2680 Miller Drive, Suite 120, Plymouth, IN 46563 or donate online at REESPROJECT.COM