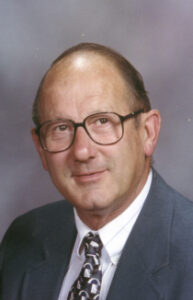 Larry D. Weiss, 66, a lifetime Marshall County resident, living at 12833 Walnut Hill Dr, Lakeville, since 1985, died unexpectedly of an apparent heart attack in Saint Joseph Regional Medical Center, Plymouth, at 9:34 p.m. on Tuesday, December 12, 2006.
Larry was enrolled in the Indiana Organ Donor Program to aid others in his memory.
The son of Hilbert and Bernice Tridle Weiss, Larry was born on November 27, 1940. He graduated from LaPaz High School with the class of 1958.
A veteran of the Vietnam War, Larry was a Spec. 4 in the United States Army.
On April 29, 1962, in the Plymouth Church of the Brethren, Larry and Diana M. Thomas were married. He had been a member of the church since 1962.
He worked for over 20 years with C.M.D. Construction Company, retiring in 2004.
He enjoyed golf and Monday night league bowling. An Indiana University basketball fan, he was a big supporter of Coach Bobby Knight.
Larry is survived by his wife, Diana, and their two sons. They are: Jeffrey T. and Donna Weiss, Indianapolis, Indiana, and their daughter Emma: and Kirk A. and Christy Weiss, Plymouth, Indiana, and children, Kailyn, Kiley and Kelsi.
Two brothers and three sisters survive as well. The brothers are Lester Weiss, York, Pennsylvania, and Don and Kaye Weiss, Elkhart, Indiana. Sisters: Virginia and Herb Schwepler, Austin, Texas: Evelyn and Harold Frick, Goshen, Indiana, and Deloris and Dwight Handschu, South Bend, Indiana.
A sister-in-law, Marjorie Weiss, South Bend, Indiana, and numerous nieces and nephews also survive.
Larry was preceded in death by an infant daughter born in 1969, a sister Vera Mae Starke and a brother Robert Weiss.
Friends will be welcomed by the family to share their memories of Larry from 9 to 11 a.m. on Saturday, December 16, 2006, at the Church of the Brethren, 1130 N. Michigan St., Plymouth.
Funeral services will be held in the church following visitation at 11 a.m. Rev. Dave Kerkove, pastor of the church will officiate. Burial will follow in New Oakhill Cemetery, Plymouth, Indiana.
Memorial gifts in Larry’s name may be made to the Church of the Brethren.