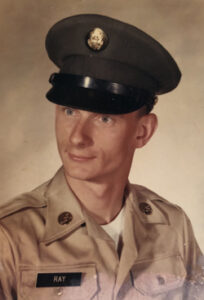 Larry E. Ray, 68, of Plymouth, passed away peacefully after a brief illness surrounded by family at his daughterâ€™s home in Plymouth. He knew he could be in no better company, and passed away, grooving into the afterlife embraced by the deepest love and affection a man could know in those moments. There is no doubt that Larry will bring levity and joy to those of us carrying on his stories and memories as long as we continue to share them.
Larry was born July 8th, 1949 in Milford, Michigan to Noble A., and Lillian Clara Ray (Reno), and spent his young life moving with them in Wyoming and Colorado, and being a mentor and watchdog over his younger brother and sister, Timmy and Sharry. No matter how rough things could get, and boy could they, Larry could be counted on to lift any mood, with jokes or stories, or just the friendliest of company one could imagine.
Larry had a long military career and it became a defining feature of his life. Drafted into the Army in 1969, he served until 1971. Performing a tour of duty in Vietnam as a door-gunner on a Huey where he received The Air Medal of Heroism. Later he joined the National Guard, where he served for 13 years as a Sergeant Major. Larry never lost touch with his battle buddies, and gave his time, kindness, and at times even his home to any of them in need. While all had their issues, Larry made it his duty to always be a light for them. For Larry, friends, especially those who shared his battle experience, were family.
Larry was a storyteller, and an utter goofball, and nothing made him happier than to see his antics bringing a smile to any face. His stories wound around and went nowhere, and all the while going everywhere at once. And if you were truly lucky, heâ€™d draw you pictures to help you along. He loved music, and there are rumors that he was the 5th Beatle: believe me, heâ€™d tell you. And if you wanted, and sometimes even if you didnâ€™t, Larry would play air guitar while cranking the tunes. Larry loved cars, particularly MOPAR cars, and found great joy in working on them. He had a skill with his hands and seemed to be able to construct anything. Many of us remember a â€˜Cuda in his barn that was there longer than we can remember. He built models and loved collecting guns. Larry was always able to find joy in life, and in the little things he found to become active in. Every word here cannot begin to live up to Larry Ray. He was a monument in our family, a kind, beautiful, intensely human figure. May all that kindness and our memories of his laugh guide us. None are ever left behind by Larry. He is remembered fondly by his daughter and son-in-law; Lauren and Fons Rosas, son and daughter-in-law; Eric and Mercy Ray, daughter; Sabrina Ray, daughter; Tina Ellis, daughter Erika Wallace and step-daughter; Jocelin Moran along with 2 grandsons Arlo and Otto Rosas. Also surviving are two sisters; Vicky Collins, and his true angel and watch dog Sam and her husband Michael Minz of Wisconsin. Along with nephews, nieces, and friends all over.
He was preceded in death by his parents, two brothers; Skip Downs and Timmy Ray and sister Diane McQueen. Larry will be honored with a Military Honors and burial at the Riverview Cemetery, 2300 Portage Ave., South Bend, IN on April 20th, 2018 at 2pm. The burial will be immediately followed by a celebration of life at Conservation Clubhouse, 720 Magnetic Parkway, Plymouth, IN 46563.