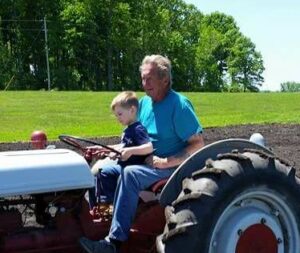 Larry Lee Masterson, 78, passed away unexpectedly in his home on Friday afternoon April 8, 2022.

He was born in Plymouth, Indiana on February 9, 1944, to Dillard “Tex” and “Bessie” Wilma Arlene (Parrish) Masterson. He attended West High School.

In the Spring of 1963, he would marry Cheryl Lynnae Emrah in her parents’ home and welcome three children: Tammy Jo, Larry Lee Jr., and Christopher William. The two would separate but would always be there for their children. Cheryl would precede in death in 2012.

In October of 1998 on a random Kroger shopping trip, Larry would run into Kathy Okerbloom and ask her out on a date for that Saturday night. She would agree and the two have been the best of friends since.

Larry was a handyman of many trades which included being a trucker, owner of Masterson Body Shop and logging. His motto was “If you’re going to do it, do it right.” Precision, attention to details, and being self-reliant and self-taught were some of the traits he passed down to his children, grandchildren, nieces, and nephews.

He was huge into horse pulling with his ponies and Belgians. Larry enjoyed carpentry and woodworking, and he loved working recently at Paul’s Logging and Wood Products operating the sawmill. Larry was also a master gardener, maintaining 7 gardens every year and sharing his passion for gardening with his family.

He was fun loving and when it came to the grandchildren and nieces and nephews, he knew how to be laid back. He loved family and they share many memories of hog roasts, fishing runs, camping and horse and wagon rides. Larry was also in the Blueberry Festival with his horses.

Larry is survived by his daughter, Tammy Jo of Plymouth; grandchildren: Ashley Mccowen, Robby Masterson, and Cortnee Eggert; 5 great-grandchildren: Kyle, Cole, Kinely, Faie and Jacob; sister, Suzanne Parker of Mishawaka; his loving companion for 25 years, Kathy Okerbloom of Plymouth as well as many nieces and nephews.

He was preceded in death by his parents; sons Larry Lee Jr. and Christopher Masterson; and siblings: Dillard “Bud” Masterson Jr., and twin sisters Joan Monteleone and Jean Flosenzier.

Memorial contributions can be made to Humane Society of Marshall Co, PO Box 22, Plymouth, IN 46563.