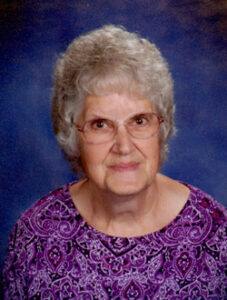 Laura Louise (Barcus) Stiles, 79, of Plymouth, passed away Monday, August 21, 2017 in the St. Joseph Regional Medical Center â€“ Mishawaka.
Born on January 19, 1938 in Plymouth, Indiana, Laura was the daughter of Charles H. and Evalena (Howard) Barcus.
She graduated from Lincoln High School in 1956.
In Plymouth on October 21, 1967, Laura married Harold Junior Stiles. He preceded her in death on November 22, 2013.
Laura worked for over thirty years at the G & G Grocery Store in Plymouth. She loved working there, spending time with her co-workers, and she enjoyed being with people that came into the store. Later, she also worked at Dave’s Supermarket in Plymouth.
She was a past member of the Women of the Moose. Laura loved her grandkids and followed them to many football games, baseball games, wrestling matches, and cross-country races. She also was a Cubs fan and Bears fan and absolutely loved time spent fishing with her husband and grandkids.
She is survived by her mother; Evalena Barcus of Plymouth, daughter; Dawn (Ron) Rogers of Delaware, two sons; Larry Mikesell Jr. of Plymouth and Jerry (Jennie) Mikesell of Plymouth, step-daughter; Paula Stiles of South Bend, Tod Stiles of Mishawaka, seven grandchildren; Brianne, Jacob, Caleb, Luke, Audrey, Emily and Tiffany, along with Bodie and Aerial Neidig, who were very special to her. Laura also had six great-grandchildren. Also surviving are her four siblings; Ruth Shorter, Sharon (Dale) Kamp, Jean (Bob) Rees and Jim (Maryann) Barcus.
Laura was preceded in death by her father; Charles H. Barcus, husband; Harold Junior Stiles, siblings; Ed Barcus, Robert Barcus, Nancy Spiek, Sandy Davenport, Betty Lawson, Linda Keller and Paul Barcus.
Visitation will be from 11a.m. -1 p.m. on Thursday, August 24, 2017 in the Johnson-Danielson Funeral Home, 1100 North Michigan Street, Plymouth. Funeral services will immediately follow in the funeral home with Rev. Charles Krieg officiating.
Burial will follow in the New Oak Hill Cemetery.
Memorial contributions may be made to Center for Hospice, 112 South Center Street, Suite C, Plymouth, Indiana 46563.