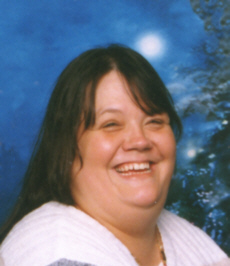 Laurie Ann Marks-Zieber, 40, died of natural causes at her home, 315 W. Dewey St., Bremen, on Monday, August 24, 2009 at 7:55 a.m.
Born in Plymouth on January 14, 1969, Laurie was the daughter of Nelson Lewis Marks and Marsha L. Shaffer Marks Rudd.
Laurie graduated from Rochester High School with the class of 1987.
On May 5, 1995, in Rochester, IN. Laurie and James K. “Jim” Zieber were married.
Laurie was a homemaker and worked as a cashier at the Bremen Marathon station.
She enjoyed computer art design taking home study courses.
Laurie was a member of the Bremen VFW Auxiliary. She is survived by her mother of Rochester, her husband and five children. They are; Brittany J. Zieber, Richard D. Zieber, Dakota J. Zieber, Ronnie W. Zieber and Johnny R. Zieber, all of Bremen.
A sister, Shannon J. (Kevin) Nelson, Rochester, and two brothers: Rodney L. Marks and companion Kathy Willard and Anthoni C. Marks and companion Cherilann Johnson of Plymouth. Her mother-in-law, Peg Zieber of Lawrenceburg, Ind and aunt Patricia Kyle of Bremen survive with cousins and caregivers Annette and Richard Fox of Bremen also survive with special aunts, uncles, cousins nieces and nephews.
Laurie was preceded in death by her father and a sister, Carrianne Marks.
Services will be at 11 a.m. on Friday, August 28, 2009, at the Johnson-Danielson Funeral Home, 1100 N. Michigan St., Plymouth. Friends may call from 10 a.m. until the time of the services at 11 a.m. Rev. Ben Hammond, pastor of the First Baptist Church, Bremen, will officiate.
Laurie will be laid to rest next to her father in New Oakhill Cemetery, Plymouth.
Memorial gifts may be made to her family.