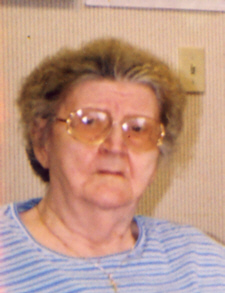 LaVerne Crist, 96, an area resident most of her life, died at 5:10 p.m. on Thursday, August 20, 2009, in Mason Health Care Center, Warsaw, IN
Born on October 1, 1912, in Ora, IN, LaVerne was the daughter of Ralph and Edith Ulely Smith. She attended Ora Schools.
LaVerne and William F. Crist were married on June 28, 1934 in Monterey, IN. William died on May 12, 1966.
Along with raising her family, LaVerne had worked as a restaurant cook and a factory worker.
She enjoyed growing flowers in her backyard.
She was a member of St. Michael Roman Catholic Church in Plymouth, where she also belonged to the Altar Rosary Society.
LaVerne is survived by three daughters: Donna (Donald) Guy of Warsaw, IN; Phyllis (Charles) Thaden of Flushing, MI and Wilma Ross of Hutchinson MN; 11 Grandchildren, 16 Great Grandchildren and 2 Great-Great Grandchildren.
She was preceded in death by her parents; her husband; a daughter: Janiece Thompson; a brother, Eugene Smith; a granddaughter; two grandsons and a great granddaughter.
Friends are invited to share memories with LaVerne’s family on Monday, August 24, 2009 from 11:00 a.m. to 1:00 p.m. at Johnson-Danielson Funeral Home, 1100 N. Michigan St., Plymouth, IN.
A celebration of the Mass of Christian burial, officiated by the Rev. Fr. William Kummer, will be held at 1:00 p.m. on Monday, August 24, 2009, at St. Michael Roman Catholic Church, 613 N. Center St., Plymouth. Burial will be in Oakhill Cemetery, Plymouth.
Memorial contributions may be made to St. Michael’s Play/Pray Zone.