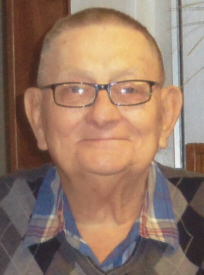 LaVerne Russell “Swede” Carlson, 80, passed away peacefully in his home at 11:40 a.m. on Wednesday, December 4, 2013.
The son of Henry E. Carlson and Edith (Johnson) Carlson, LaVerne was born in Grovertown, Indiana on September 17, 1933. He graduated from Grovertown High School with the class of 1952.
On June 27, 1954, LaVerne R. “Swede” Carlson and Joan L. Drake were married at the Plymouth First United Church of Christ.
Swede worked for Whirlpool in LaPorte for 2 years, then for 10 years at Swanson’s Poultry Farm (now Swan Lake). He then worked for Breeding Farm Supply in Plymouth for 18 years, Bomarko for 8 years, and finally before his retirement in January of 1999, he worked for the Marshall County Highway Department for 8 ½ years.
A member of the Donaldson Evangelical Covenant Church, LaVerne was a willing and faithful volunteer for many activities through the church.
Swede enjoyed tinkering in his garages, where many stopped in on occasion for small chats. He also enjoyed working in his tractor tire gardens. Having served in the National Guard, he was a member of the American Legion Post #27 and a member of the Moose Lodge. Swede’s greatest memory was going on a cruise to the Bahamas with his wife, daughters and son-in-laws to celebrate their 50th wedding anniversary.
Swede is survived by his three daughters: Jerri L. (David) Benjamin of Naperville, IL and their daughters, Tracy and Jamie of Grand Rapids, MI.; Sherri (Bob) Wilson, of Grovertown and their son, Levi (Brandii) Wilson and their daughters Libby and Paige of Westfield, IN; and Danae (Chris) Howard and their son Hunter and twin girls Braylee and Sophee of Walkerton, IN. and Ashlie (Tom) Hartgraves of Indianapolis, IN.; Jody (Ty) Fischer and their daughter Erica (Sean) McNair and son Lucas of Ocoee, FL. His brother, Walter L. (Mickey) Carlson of Mishawaka also survives.
He was preceded in death by his loving wife, Joan, his parents, and his great-grandson, Jacob Robert Hartgraves.
Friends may visit with the family from 4 – 8 p.m., on Friday. December 13, 2013 at the Johnson-Danielson Funeral Home, 1100 N. Michigan St., Plymouth, Indiana.
Funeral services for Swede will be held on Saturday, December 14, 2013 at 1:30 p.m. in the funeral home, with visitation one hour prior to the service. Pastor Mark Harder of the Evangelical Covenant Church will officiate.
Interment will be in the Swedish Cemetery, Union Road, Donaldson, IN where military honors will be accorded him by members of the Plymouth American Legion Post 27, Veterans of Foreign Wars – Marshall County Post 1162 and the D.A.V.
Swede’s family wishes to thank the many caregivers and friends, his church and all who offered their services and prayers throughout this difficult time.
Memorial gifts in LaVerne’s memory may be made to the Center for Hospice Care, 112 S. Center St., Plymouth, IN 46563 or the Covenant Church, P.O. Box 67, Donaldson, IN 46513.