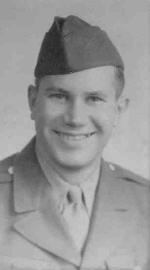 LaVon R. “Von” Balmer, 85, 406 E. Jefferson St., Bourbon, died suddenly of natural causes on Monday, Dec. 3, 2001. Von, a Bourbon resident for the past nine years, formerly of the Cass Lake, Minn. area for 20 years, died in the Bremen Community Hospital at 11:50 a.m. Von was born in Plymouth on May 21, 1916. He was the son of Peter Balmer, Jr., and Marie Reneas Balmer. He attended Plymouth schools. A United States Army veteran, Von was proud to have been a part of the Iwo Jima Campaign during World War II, serving from July 1943 to December 1945. He was decorated with the Bronze Star and was a member of the Disabled American Veterans. On March 23, 1953, in Plymouth, Von and Eloise J. Beam were married. A registered watchmaker, he was the proprietor of L.R. Balmer Jewelry on W. LaPorte St., Plymouth, from 1947 to 1957. For the next 15 years he farmed, retiring in 1971. A consummate fisherman, he loved the sport. He was also known as a “tinkerer” and handyman. Von is survived by his wife, Eloise, of Bourbon, and by two sons and two daughters. His sons are Larry W. and Marsha Balmer, Plymouth, and Walter “Dick” R. and Jill Balmer, Bremen. Daughters Yvonne E. Balmer and spouse, Jim Shirley, Bloomington, Ind. and Darla Kaye and Patrick Finnegan, Bemidji, Minn., survive, together with seven grandchildren, three great-great-granddaughters and a sister, Bertha Balmer, Plymouth. Von was preceded in death by his parents, a sister, Ruth Balmer, and two brothers: Walter and Richard Balmer. Friends may visit with the family at the Johnson-Danielson Funeral Home, 1100 N. Michigan St., Plymouth, on Wednesday, Dec. 5, 2001, from 5 to 7 p.m. Funeral services by the Rev. John Hand, Von’s nephew, will follow visitation at 7 p.m. in the funeral home on Wednesday evening, Dec. 5, 2001. A second nephew, Denny Beam, will provide special music. A graveside service with military honors, provided by VFW Post 1162 will be held at Oakhill Cemetery, Plymouth, on Saturday, Dec. 8, 2001, at 10 a.m. Memorial gifts in Von’s memory may be made to the Disabled Veterans of America.