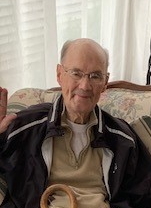 Lawrence L. Kuskye, 92, was born in South Bend, IN on November 29, 1926, and passed away on October 18, 2019, surrounded by his adoring family.
Most knew him by â€œLarryâ€ and that he was a husband, father, grandfather, uncle, and friend. He attended West Township High School, graduating in the class of 1945. He was a World War II Veteran in the Army, having been stationed in Europe. After he returned home he married Marilyn Overmyer on March 20, 1949, in Burr Oak United Brethren Church. He worked for Studebaker and retired from the Durkee Company in 1986. Larry was a Cub Scout leader and Trustee at Pretty Lake Church. He and his wife are members of the Tyner United Methodist Church. Larry was dedicated to his family and his cars. He always had a kind word and a story to tell everyone.
He was preceded in death by his parents Lawrence and Mildred (Richardson) Kuskye, brothers Everett, Richard, Elson (Duke) & sisters Viola and Evy.
He is survived by his wife of 70 years, Marilyn; his sons Larry Kent (Cindy) Kuskye, and Lamonte (Ron) Kuskye, brother Ralph Kuskye and sister Scarlett Kuskye. He is blessed with 3 grandchildren Jeremy (Stephanie) Kuskye of South Bend, IN, Brandon Kuskye of Plymouth, IN, and Kari (Jarod) Wakeland of South Bend IN, 6 great-grandchildren and 32 nieces and nephews, as well as a host of friends and other family members. He adored every one of his family and friends. Calling will be Wednesday, October 23rd starting at 10:00 a.m. with a service at 1:00 p.m. at Johnson-Danielson Funeral Home 1100 N. Michigan Street Plymouth, IN 46563 with Thomas C. Rough officiating. Burial will follow at New Oak Hill Cemetery with Military Honors provided by members of the American Legion Post 27, Veterans of Foreign War- Marshall County Post 1162 and Disabled American Veteran Chapter 42.
In lieu of flowers please consider donations in his name to the Tyner United Methodist Church at 4501 French St, Tyner, IN 46572