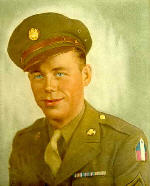 Lawrence W. “Larry” Peregrine, 86, a Marshall County resident since 1925, coming from South Dakota, resided at 610 E. LaPorte St., Plymouth . Larry died following an illness, at 9:50 p.m. on Friday, April 5, 2002 , in Miller’s Merry Manor, Plymouth . Born in Mitchell, South Dakota, on Sept. 15, 1915, Larry was the son of Frank E. and Margaret M. DuCharme Peregrine. Larry attended Plymouth High School. He was a member of the United States Army during World War II, serving his country from 1942 to 1945. He was a lifetime member of the American Legion, Post 27, Plymouth , the V.F.W. Marshall County Post 1162 and the 40 & 8, #1511. On April 18, 1946 , in Plymouth , Larry and Annabelle K. Cowan were married. For twenty years, Larry worked for the Indiana State Highway Department of Transportation, retiring in 1981. A sports spectator, he enjoyed motorcycles, loved NASCAR racing, his favorite; Jeff Gordon. Larry was no stranger to most any keyboard instrument, guitar and the harmonica, mastered all by ear. Larry is survived by his wife, Annabelle, who on April 18, 2002 , would have celebrated their 56th wedding anniversary, and by their two sons: Larry Dale and Jayme-Ayne Peregrine, of Cassopolis , Mich. , and their children Christian, Terry Ann and MacKenzie. Terry L. and Suzanne Peregrine, of Plymouth and children; Heather, William, Lisa and TJ also survive, together with nine great-grandchildren. Larry’s sister, Geneva Thomas, and sisters-in-law, Adine and Jane Peregrine all of Plymouth , survives as well as do several nieces and nephews. Larry was preceded in death by his parents and four brothers: Wally, Calvin, Dale and Garold Peregrine. Visitation and a celebration of his life will be held from 2 – 4 and 6 – 8 p.m. on Tuesday, April 9, 2002, in the Johnson-Danielson Funeral Home, 1100 N. Michigan St., Plymouth . Funeral services will be at 10:30 a.m. on Wednesday, April 10, 2002 , in the funeral home with the Rev. Charles Krieg and nephew Earl Krim officiating. Military graveside rites in Oakhill Cemetery, Plymouth, will be conducted by the V.F.W. and American Legion Posts Memorial gifts in Larry’s memory may be made to the Alzheimer’s Association.