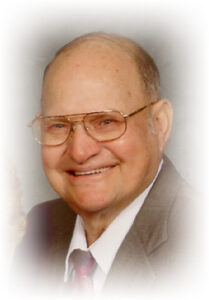 Leo R. Houin, 80, died at 7:03 a.m. on Wednesday, July 28, 2004, following several years of a courageous battle against cancer. Leo died in Saint Joseph Regional Medical Center, Plymouth. He had lived at 11386 Sunnylane Drive since 1991, in the Forest Hills subdivision that he developed.
Born on his family’s Plymouth homestead on June 9, 1924, Leo was the son of Francis A. and Frances R. Smith Houin. He graduated from Plymouth High School with the class of 1943.
He married the former Mary Jane Johnson, who passed away in 1980. He was then wed to Marjorie Michel Houin, who died in 1982. On August 18, 1984, Leo and Marilyn E. Sellers-Bules were married. They were set to celebrate their 20th anniversary in three weeks.
Leo was a successful lifetime farmer and land developer. He had served on the 4-H Fair Board, Plymouth School Board, as the Center Township Assessor and a director of the American Milk Producers Inc.
Family life was very important to him: especially his children, grandchildren and great-grandchildren. He loved to travel, camp and golf. He enjoyed Plymouth High School basketball, attending Purdue bowl games and was a former member of the John Purdue Club.
He was also a member of the Plymouth Moose Lodge 741 and of the Knights of Columbus Council 1975.
Leo is survived by his spouse Marilyn and by one daughter, Louise A. and Gary Webster, Noblesville, Ind., and seven sons; they are: Allen L. Houin, Kenneth R. and Jan Houin, Mark A. and Rene Houin, Kevin L. and Tammy Houin, all of Plymouth. Also Marvin L. and Diane Houin, Bremen, Dr. Herman P. and Connie Houin, Grosse Pointe Shores, Mich., and Dr. Raymond E. and Eileen Houin, LaPorte, Ind.
Forty-one grandchildren and 14 great-grandchildren survive.
Two brothers and three sisters also survive, they are: Bernard L. and Betty Houin, Argos, and Lawrence E. and Frances Houin, Plymouth, Irene Wenzel, Mishawaka, Catherine A. Haeck, and Teresa R. and Lloyd Anderson, of Plymouth.
Also surviving are a daughter-in-law, Susan K. Houin, Plymouth, three step-daughters, Elaine R. and John Ferguson, Argos, Deb Cortner, McCordsville, Ind., and Kathy Hammonds, Tippecanoe and two step-sons, Robert H. and Sharon Bules, Bremen, and Greg Michel, Plymouth.
Leo was preceded in death by two spouses, a son, Earl Lee Houin, and an infant child. A sister, Sr. Mary Francis Houin, P.H.J.C., and two brothers, Elmer V., and Carl Houin, step-son Ron Michel and step-grandson Todd, have also died.
Friends will be welcomed to celebrate Leo’s life from 2 to 8 p.m. on Friday, July 30, 2004, at the Johnson-Danielson Funeral Home, 1100 N. Michigan St., Plymouth. A rosary will be prayed at 8 p.m.
A Mass of Christian Burial will be held at 10:30 a.m. on Saturday, July 31, 2004, in St. Michael’s Roman Catholic Church where Leo was a member. The Rev. Father William Kummer will officiate.
Interment will be in New Oakhill Cemetery, Plymouth.
The family requests that in lieu of flowers, memorial gifts may be given in Leo’s memory to the Marshall Co. 4-H Program, St. Michael’s school and church, the Marshall County Hospice, or to a charity of the donor’s choice.