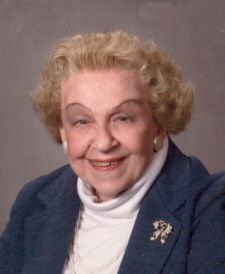 Leona M. Gridley passed away peacefully in her sleep on the morning of Sunday, March 20, 2011. Leona has been a Ewing Street resident in Plymouth for the past 48 years and a Marshall County resident most of her lifetime. Although her physical age was 91, Leona was proud that her appearance and activities – which included an occasional Harley ride with her son, never reflected that, although she never did enjoy the aftermath of the “biker-lifestyle windblown look”, even with her son’s assurance that she was still “hot”.
She was born in Tennessee, one of four daughters born to John E. and Frances H. (Grosch) Harley. She attended West School and graduated from Argos High School in 1938 and always enjoyed attending their Alumni dinners.
Leona served as a clerk, cashier and personal secretary during her 34 years of service with NIPSCO. She was a longtime member of the Trinity United Methodist Church, Plymouth.
Leona’s outgoing personality has never held her back in meeting new people or getting reacquainted while on a trip to the grocery store. She loved children and they could always expect candy treats and had a freezer stocked with Dibbs Ice Cream snacks and ice cream cakes for visitors to her home, Halloween was a favorite holiday as it gave her an avenue and excuse to purchase more candy to treat neighborhood and relative children and expected their visitation adamantly with no excuse.
She took great care of her yard and flower gardens through the years. She would frequent garage sales with her son whenever possible and was a stickler for being punctual while in her company. Her greatest joy came from her son Glenn’s daily early morning visits before work to walk her dogs and their date every Saturday of going to McDonald’s for breakfast (her favorite breakfast restaurant), and shopping at Walgreens with the staff of both looking forward to her appearance.
Leona is survived by her son, Glenn Harley “Stryker” Gridley of Plymouth and his companion, Geri Liesberger and her two dogs, Jasmine and Bait, she had two step-children from her marriage to Dean Gridley, who served in WW2 as an Army staff Seargent in the Signal Corp and saw action in campaigns in N. Africa, Sicily, Corsica, Italy and France, those boys were Bruce Gridley of S.Carolina and Barry Gridley of Dayton. Ohio, both are married to wonderful women and have children of their own. Her niece, Helen Ann Heiniger of Kouts, Indiana and Leona’s younger sister Hazel Heiser of Florida also survive.
She was preceded in death by sisters; Loretta Nifong and Viola Kruyer.
Visitation will be held from 5 – 8 p.m. on Friday, March 25, 2011 in the Johnson-Danielson Funeral Home, 1100 N. Michigan St. Plymouth. Funeral services will be conducted at 11 a.m. Saturday, March 26th in the funeral home with the Rev. Charles Krieg officiating.
Burial will follow in the New Oakhill Cemetery next to her parents.
Memorial gifts may be given to the Marshall County Humane Society, P.O. Box 22, Plymouth, Indiana 46563.