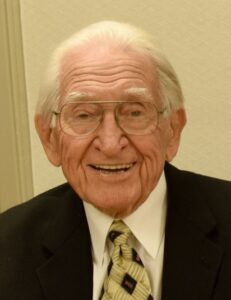 Leonard Daniel Isban, 93, passed away on Tuesday, August 10, 2021, at St. Joseph Regional Medical Center in Mishawaka, Indiana. The son of Alex and Elizabeth (Robakowski) Isban, of South Bend, Indiana, Leonard graduated from Washington High School and enlisted afterwards in the United States Navy, serving in the Pacific aboard the USS Vammen. It was on that ship that he won several prizefights, a fact he only recently revealed, to his family’s surprise. He went on to receive an honorable discharge from the US Navy and return to South Bend where he met JoAnn Zell, who charted the course of his future happiness.

After working for several packaging companies as a traveling salesman early in his career, Leonard recognized a need in the interior door industry. With the support of JoAnn, Leonard began producing small batches of corrugated honeycomb prototypes in their basement. When satisfied, they took the leap forward and formed Mid-American Container in a small building in Plymouth, Indiana in 1965. This business, renamed American Containers, ultimately expanded over the years, and currently includes facilities in Plymouth, Indiana, Carrollton, Georgia and Stockton, California. Perhaps Leonard was most proud that he and JoAnn could accomplish all of this by including in the company his son Michael, and his sons-in-law, Paul Maich and Greg Payne. His was a true family business.

But business was not all that occupied Leonard. He was a voracious reader all his life and could talk to anyone about anything. Countless times he stunned his grandchildren by the breadth of his knowledge about the world around him, wealth of his historical references, and impressive vocabulary, just one of the many reasons they were all so proud of him.

As a successful business owner, Leonard immersed himself in giving back to the community he felt had been very good to him. He was a lifelong enthusiast for the United Way of Marshall County and a supporter of St. Michael’s Catholic Church and School. With other business leaders, he was instrumental in raising money to build the St. Joseph’s Hospital in Plymouth. For that work, and for his continued involvement and support, he and JoAnn received the Community Service Award in 1999 and 2016.

As avid and loyal supporters of the University of Notre Dame, the couple were consistent donors to the University’s Scholarship Program, Golf and Football Programs, and proud of their donation of the Isban Auditorium, located in the Guglielmino Athletic Complex.

But perhaps their single greatest gift to the community was the Boys & Girls Club of Marshall County. Both Leonard and JoAnn recognized the increasing need for a safe place for children to go after school before parents returned home from work. And so, in 1995 they began working with the national organization to create a local Boys & Girls Club. They bought and donated a vacant building that Leonard and his family and friends worked on for many hours to update and bring up to code. When the doors opened many months later, 35 excited young children signed up. Both Leonard and JoAnn continued to be involved personally as the club grew, serving on the board and offering classes, and in 1998 they provided the financial support for the construction of a gymnasium. In 2009, demand in the neighboring community of Bremen, Indiana made clear the need for an additional facility. Over the past few years, the Boys and Girls Club of Marshall County has averaged about 800 school-aged members a year, with thousands of children served since its inception. Both Leonard and JoAnn received the “Sagamore of the Wabash” award from the state of Indiana in recognition of their community service and involvement.

An obituary never really captures the person. How can you say how hilariously funny Leonard could be, how he was always the calmest person in a crisis, how generous and kind and loving he was and how caring? He could command a room in a business meeting and demand much, yet easily take a back seat when spending time with his grandchildren or great grandchildren at a family gathering.

And how can you quantify his love of golf, developing his earliest connections as a caddy at the South Bend Country Club. He shared his love of the game with his family and was most at home on the course.

And when he played double bid euchre, as the captain of the “Silver Foxes,” his long-time opponents, the “Golden Girls” and other family members, all delighted in setting him, which they often did. However, he remained undaunted by these set- backs and continued to bid every chance he got.

It is hard to summarize a person’s life, but this young boy, part of a Polish family growing up after the Great Depression in the West End of South Bend, went on to do great things for his family and friends and many who never knew him.

We are missing him already. He was a sweet man, and his loss is deep and undeniable.

On Wednesday, September 15, 2021, from 3 to 6 pm, there will be a celebration of life for Leonard Isban, on the front lawn of American Containers, located at 2526 Western Avenue, Plymouth, Indiana. Leonard passed away August 10 of this year, and because of the resurgence of Covid cases, a private funeral Mass for the immediate family only was held on August 28th.

Wednesday afternoon will provide a chance for friends and family to gather safely outdoors under the shelter of a tent. Beverages and hors d’oeuvres will be served with plenty of opportunity for stories to be shared. We, his family, look forward to gathering with you to celebrate a life well lived.