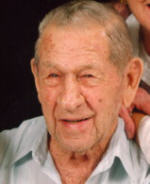 Leonard W. O’Dell, 92, died of natural causes at 6:15 a.m., Friday, June 21, 2002 at the Pilgrim Manor Nursing Home, Plymouth . He was born in Crawfordsville , Indiana , the son of John and Mary Johnson O’Dell. Leonard moved to California in 1926 and worked in my different fields. He was a farmer and served on the Los Angles Fire Department. He also owned and operated many different stores and restaurants. In 1932 in Tiosa , Indiana he married Viola M. Rowell, who passed away in 1999. Then on December 31, 1952 , in Las Vegas , Nevada he married Madeline S. Owens, who passed away in 1987. Leonard had several interest and hobbies, they included square dancing, woodworking and working in his garden up until the age of 91. He also enjoyed reading, and a love for food. Leonard was and avid baseball fan and loved to see his Los Angles Dodgers win. His daughter, Nancy A. Davis, Plymouth , a grandson Scott and Ann Davis, a great granddaughter Nicole Davis, Plymouth , survives him. A special niece, Janice Meredith, and a special nephew, Robert and Toni Tolbert, all of Plymouth , and several other relatives from the Michiana area. His parents, his two wives and several brothers and sisters preceded Leonard in death. A celebration of his life and memorable times will be shared during visits with his family from 4 to 6:30 P.M. On Tuesday, June 25, 2002, in the Johnson – Danielson Funeral Home, 1100 N. Michigan St. Plymouth. Funeral services will be held at 6:30 P.M. on Tuesday, June 25, 2002 at the Johnson – Danielson Funeral Home, with Pastor Paul Spasic, officiating. A graveside service will be held at 11:00 A.M. on Thursday, June 27, 2002 at San Jacinto Cemetery , San Jacinto , California . Memorial gifts in Leonard’s memory may be made to the Gideon’s Living Memorial Bible Plan, or to Plymouth Christ Fellowship Church .