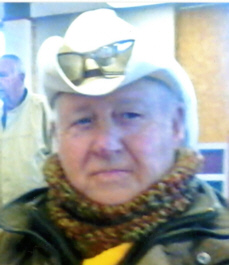 Leonard W. â€œWayneâ€ Vice, 80, passed away of natural causes with his family by his side early Friday morning, April 28, 2017 at the St. Joseph Regional Medical Center in Mishawaka.
Wayne was born on August 16, 1936 in Macy, Indiana to Jesse and Ruth (Allen) Vice. He attended schools in LaPaz.
A man who had an eye for treasures, he moved to Arizona and worked in a junk yard and had his own booth at the flea markets. After spending 15 years there, Wayne moved back to Plymouth to be closer to his children and their families. Wayne was best known around Plymouth for being seen on his white moped. He was a very simple man and lived his life to the fullest. His dog, Teddy was his best friend and guard dog. He loved having coffee at Burger King with his friends and best bud, John. He enjoyed mowing his lawn and tinkering with anything to â€œfix itâ€. He loved his family and adored 5 girls. Wayneâ€™s grandkids called him â€œCowboy Grandpaâ€ and was always seen with his cowboy hat on. Wayne is survived by his daughters and son: Tina Bussie of Plymouth, Debra Strickland of Plymouth, Bonnie (Walter) Quinto of Walkerton, Judy Neirynck of Valparaiso, Patty (Albert) Parker of LaPorte and Tim (Sandy) Vice of Plymouth; 17 grandkids, 21 great-grandkids and 1 great-great-granddaughter.
He was preceded in death by his parents, grandson, Patrick Strickland, and siblings: Opal, Mary, Wallace, Jesse and Richard.
A Celebration of Life will be held on Thursday, May 11, 2017 from 1-3 p.m. EST in the Johnson-Danielson Funeral Home, 1100 N. Michigan Street, Plymouth.
He will be laid to rest with his parents in the Five Corners Cemetery in Macy, Indiana at a later date.
Memorial contributions can be made to St. Jude Childrenâ€™s Research Hospital, 262 Danny Thomas Place, Memphis, TN 38105.