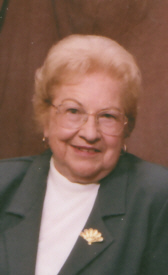 Leota F. “Lee” Boudreau, 725 E. Victoria St., South Bend, Ind., died of natural causes in Memorial Hospital, South Bend, at 11:50 a.m. on her 87th birthday, Monday, September 24, 2007.
Leota spent her lifetime learning about new things and meeting new people. She remained very active and always maintained an interest in current events.
Born in Viewfield, Saskatchewan, Canada, on September 24, 1920, Leota was the daughter of Lee Osmer and Celina Mary Charlotte (LeCocq) Stuckey.
She graduated from Donovan, Ill. High School with the class of 1939.
On December 23, 1939, in the Evangelical Lutheran Church in Papineau, Ill., Leota and Franklin “Frank” F. Boudreau were married. Frank died on March 1, 1995.
During World War II, Leota was a “Rosy the Riveter,” making airplanes parts on the assembly line.
In 1962 the family moved to Plymouth and in 1964, she graduated from the Logansport Beauty College. She also worked as a waitress before operating a successful beauty shop in her home, “Lee’s Beauty Salon,” until her retirement in 1981.
It was then that she and Frank moved back to Momence. Following the death of Frank on March 1, 1995, Leota moved to South Bend in 1997. There she became a member of the Sunnyside Presbyterian Church and was involved in the Ladies Circle.
A nature lover, she enjoyed feeding and watching birds, gardening and canning vegetables. She made as heirlooms, hand sequined Christmas stockings for her 15 grand and great-grandchildren.
A loyal Cubs fan, she served on the first Blueberry Festival Committee and was a member of the Momence Women’s Club and participated in the Gladiola Flower Show.
Leota is survived by two daughters and their families.
They are: Patricia Ann and Roger Heninger, Grant Park, Ill., and their children: Alan R. (Lorene) Heninger, Brookfield, Ill.: David M. (Julie) Heninger, Grant Park, Ill., and Dawn M. (Ed) Kinstner, Momence, Ill..
Pamela Kaye Boudreau, with whom she made her home resides in South Bend, Ind..
Six great-grandchildren also survive: Alan and Lorene’s children: Alicia and Madison and David and Julie’s son: Alex and Dawn and Ed’s children: Jordan, Kaylie and Cody.
Leota’s twin sister, Lavella Arp of Momence, Ill., also survives together with two sisters in Watseka, Ill.: Ella Haberkorn and Dorothy Knoblauch and a brother, Gerald (Roberta) Stuckey of Martinton, Ill.
Several nieces and nephews survive as well.
Leota was preceded in death by two brothers; Clarence and Isadore Stuckey.
Visitation for Leota Boudreau will be from 11 a.m. to 1 p.m.(CDT) on Thursday, September 27, 2007, at the Cotter Funeral Home, 224 E. Washington St. in Momence, Ill.
Funeral services will follow at 1 p.m. (CDT) in the funeral home. Pastor James B. Miller of the Sunnyside Presbyterian Church of South Bend will officiate.
The Johnson-Danielson Funeral Home, 1100 N. Michigan St., Plymouth, Ind., is assisting the family with local arrangements.
Interment will be in Kankakee Memorial Gardens, Kankakee, Ill.
Memorial gifts in memory of Leota may be made to a charity of the donor’s choice.