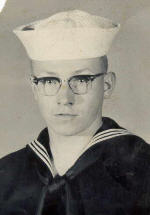 Leroy R. “Lee” Sporner, 63, died of natural causes at his home, 17329 9th Rd., Plymouth, on Thursday, Nov. 8, 2001. Lee had lived there since 1983, coming from German Valley, Ill. He was born on Oct. 26., 1938, in St. Mary’s, Penn., the son of Joseph A. and Emma L. Cowan Sporner. He attended St. Mary’s Elementary in Pennsylvania and in Plymouth St. Michael’s and West High School after which he joined the United States Navy. Farming was in the Sporner Blood and Lee appreciated the solitude Marshall County offered him. A dairy farmer since 1983, Lee had previously drove truck as a Teamster for Mayflower & Beacon Van Lines for over 20 years in the moving industry. He enjoyed woodworking and, was a radio Cub fan. Lee is survived by two sisters: Bernece M. Pomeroy South Bend, and Viola M. Sporner, Warsaw. A sister-in-law in Florida, Patricia A. Sporner also survives together with many nieces and nephews. Lee was preceded in death by his parents and by six brothers: Robert, Melvin, Raymond, Kenneth, Leonard and Carl Sporner. Visitation with the family will be at the Johnson-Danielson Funeral Home, 1110 N. Michigan St., Plymouth, on Wednesday, November 14, 2001 from 12 to 2 p.m. Funeral services will follow in the funeral home at 2 p.m. Father Anthony Gillespie, pastor of St. Michael’s Roman Catholic Church of which Lee was a member, will officiate. V.F.W. Post 1162 will provide military honors at the New Oakhill Cemetery graveside. Gifts in memory of Lee may be made to the Mission 2000 of St. Michael’s Church.