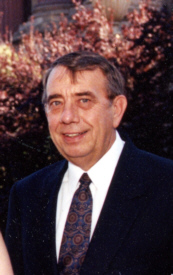 Leslie â€œLes” William Haack, 74, of Plymouth, passed away at his home on Sunday, December 18, 2016.
Leslie was born in Pomeroy, Iowa on March 10, 1942. He graduated from Pomeroy High School in 1959 prior to serving in the United States Navy from 1960 to 1964. On June 26, 1965 in Menlo Park California, he married Therese Doyle of Dundee, Scotland.
Leslie worked for many years as a production supervisor and manufacturing engineer for various companies in Iowa and Indiana. He enjoyed playing golf, working on home improvements, and researching genealogy.
Leslie is survived by his wife Therese; son Edward Haack, daughter-in-law Milinda Lommer, and granddaughters Margaret and Ella of Larkspur, CA; son Jason Haack and partner Kevin Berry of Flowery Branch, GA; brothers Charles (Donna) Haack of Pomeroy, IA, and Lee (Elaine) Haack of Brandon, SD; sisters Marcella Desormey of Columbia Heights, MN, Carol Ford of Pomeroy, IA, and Judith (Jim) Binzen of Thomson, IL; and many nieces, nephews, and other relatives.
He is preceded in death by his parents, Herman and Marie (Gutz) Haack of Pomeroy, IA; his brothers Robert Haack of Goshen, IN, and Donald Haack of Apple Valley, MN; and his sister Luella Hammen of Rockwell City, IA.
In lieu of flowers, the family asks that charitable contributions be made to the organization of the donorâ€™s choice. A memorial service celebrating Leslieâ€™s life will be held at a later date.