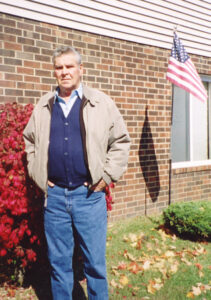 Lester D. “Les” Mansfield died following a nine month struggle from complications of Pancreatic Cancer at his residence, 2000 Westgate Ave., at 10:57 p.m. on Wednesday, Sept. 14, 2005. Les died in the loving care and company of his family, he was 68 years old.
His family said that he will long be remembered for his “giving heart.”
He had lived in Marshall County for the past 13 years, coming from Walkerton.
Born the son of Fred William and Elsie Marion (Phillips) Mansfield in Michigan City, Ind., on July 7, 1937, Les attended Michigan City High School.
He enlisted in the Navy in 1954 and was later given a medical discharge. He was a member of the Walkerton American Legion Post #189.
On March 20, 1993, in Plymouth, Les and Susan A. Snodgrass were married.
Les was a supervisor at Bremen Glass for 8 years and a rodman for Plymouth Land Survey for 11 years.
He loved spending time with his grandchildren. He enjoyed gardening and fishing in the local lakes.
Les is survived by his wife, Susan of Plymouth and by a daughter and son-in-law, Lillian R. and Bryan Whitaker, LaPaz, Indiana.
Three stepsons also survive. They are: Anthony L. Feliciano, Lakeville, Ind.; Steven J. Feliciano, Plymouth and Scott A. Feliciano, South Bend.
A grandson, Keanon Clemons and a granddaughter, Kaitlynn Whitaker together with four step-grandchildren survive as well. They are Bryant Clevenger, Zephen Feliciano, Breann Feliciano and Daysha Feliciano. Three brothers and two sisters are also survivors of Les’ death. They are: Richard Mansfield, Ypsilanti, Mich.; Earl and Sharon Mansfield, Rolling Prairie, Ind.; John and Vicki Mansfield, Goshen, Ind.; Barbara and Robert Klosowski, LaPorte, Ind., and Vella and Jack Pointon, LaPorte, Ind.
He was preceded in death by his parents and four brothers: William, Louis, Glen and Leon Mansfield and three sisters: Wilma, Florence and Lois Mansfield.
Friends will be welcomed to share memories with the family at a visitation from 11 a.m. to 1 p.m. on Saturday, Sept. 17, 2005 at the Johnson-Danielson Funeral Home, 1100 N. Michigan St., Plymouth, where services will be held at 1 p.m. The Rev. Steven Patrick of the Plymouth House of the Lord will officiate.
Cremation will take place and an interment service will be held in the Woodlawn Cemetery, Walkerton, Ind. on Monday, September 19th at 11 a.m. with military honors accorded by the American Legion Post No. 189, Walkerton.
Memorial gifts in Les’ memory may be made to the Marshall County Center for Hospice and Palliative Care.