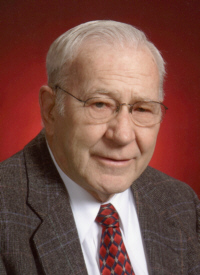 Lester D. Read, 90, passed away in his home on Saturday July 9, 2016 with his family by his side.
Lester was born one of seven children belonging to Ivan and Daisy Read on September 14, 1925 in Plymouth, Indiana. He was a 1943 graduate of Lincoln High School in Plymouth.
Shortly after graduation, Lester was drafted into the Marines, serving from December 1943 until May 1946. Read joined the first wave of 40,000 men committed to take the Japanese island of Iwo Jima. As a member of the Fifth Tank Battalion, he helped coordinate tank and infantry positions.
As part of the assault on Iwo Jima, Lester received orders to climb Mt. Suribachi and radio back directions for tank movements. The group was quickly pinned down by enemy gunfire. The lieutenant in charge called for five volunteers, Read quickly volunteered to continue the assault. As the men charged over the top, the Japanese Army had retreated. Mt. Suribachi had fallen.
Taking an American flag given to them by the lieutenant, the group secured it to a small piece of pipe, raised it, and quickly ran to take cover. A marine photographer snapped a photo of the group of flag raisers, which included Lester. Having seen the original assault, Joe Rosenthal, an Associated Press Photographer, requested a re-enactment of the feat, but one with a much bigger U.S. Flag. This second photo, which did not include Read, would become one of the most celebrated pictures of World War II.
When Lester returned home from the service, he started working for his father, who owned the Plymouth Fertilizer Company. In 1960, a fire destroyed the plant. His two younger brothers, James and Jay, and he rebuilt the plant. With the retirement of his father that same year, Lester became the president of the company, a position he held for thirty-nine years until the business sold in 1999.
Lester married Susan Frederick on March 27, 1949. Lester and Sue raised four children: Nancy, Steven, Jane, and Jeffrey.
Lester was a life-long active member of the Trinity United Methodist Church in Plymouth. He was Sunday School Superintendent for 25 years and a member of the administrative board for over 50 years. He was involved with missions making two trips to Zimbabwe to teach African University professors how to press oil from veronica seeds.
Not one to draw attention to himself, Lester always believed he could succeed in life by working a little harder than others. He distinguished himself by doing just that. He was a pillar for his family and church.
He was selected as a Plymouth High School distinguished alumni in 2003.
He is survived by his wife of 67 years, Susan of Plymouth and their children: Nancy Frye (Donaldson, IN), Steven (Sandra) Read (Bremen, IN), Jane (Matthew) Schori (Warsaw, IN), and Jeff (Suzette) Read (Plymouth, IN). His grandchildren are: Timothy (Tasha) Frye and their children Jonathan and Felicity, Rob Riewoldt, Lauren Read, Abby (Andy) Naunheimer and their son Aaron, Erica (Johnathan) Sutherlin, Zachary Schori, Mitchell (Kayla) Read and their children Case, Rayne and Grayson, Nicholas Read and Libby Read. Also surviving are his siblings, James (Barbara) Read and Ellen (Bruce) Snyder.
Lester was preceded in death by his parents and siblings: Ruth Flosenzier, Treva Nelson, Wilma Ambler, and Jay Read.
Visitation will be held from 4-7 p.m. on Thursday July 14, 2016 in the Johnson-Danielson Funeral Home, 1100 N. Michigan Street, Plymouth.
Funeral services will be held on Friday, July 15, 2016 at 11 a.m. in the Trinity United Methodist Church, 425 S. Michigan Street, Plymouth. Visitation will resume one hour prior to the service in the church. Reverend Maurice Grindle will officiate.
Burial will be in the New Oak Hill Cemetery with Military Honors provided by members of the American Legion Post 27, Veterans of Foreign Wars- Marshall County Post 1162 and D.A.V.
Memorial contributions can be made to the Trinity United Methodist Church.