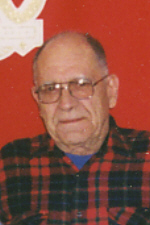 Lester H. “Les” Grover, 77, residing at 317 Nursery St., Plymouth, for nearly the past 20 years, died from a long term illness at 6 p.m. on Wednesday, November 23, 2005, in Miller’s Merry Manor, where together he and his wife have resided since October of this year.
Born at home in Plymouth on April 14, 1928, Les was the son of Harry B. and Myrtle May Smith Grover.
He was educated in the old Hibbard country school house.
In Plymouth, on December 22, 1946, Les and Maxine E. McCalmont were married in the parsonage of Rev. Walter and Gladys Mangun.
Les built his first motorized bicycle at the age of twelve. He probably got into a whole lot of trouble about it as he took his grandmother Myrtle’s new Maytag washing machine apart to use the motor.
The love of motors stuck with him as a stockcar and motorcycle racer, he won many championships and had a great time, competing at the Warsaw and New Parris Speedways.
He was also an excellent mechanic. He first worked for Nash Autos and then was hired by Labas Chevrolet in Plymouth.
He later worked for the Read family at the Plymouth Fertilizer Plant as a fabricator, repairman, welder and driver. In his retirement, he repaired lawn mowers.
He had attended the Bible Baptist Church in Plymouth.
Les is survived by Maxine, his wife of almost 59 years.
A brother and sister-in-law, Charles M. and Dolores Grover, Argos, also survive together with two nephews and two nieces. They are: Jim and Judy Grover, Culver; Jerry and Joyce Grover, Indianapolis; Barb and Bruce Pearson, Argos and Donna and Dwight Hite, Culver.
Ten great-nieces and nephews and ten great-great-nieces and nephews survive as well.
Les was preceded in death by his parents and one brother and sister-in-law, Marvin L. and Edith Grover. Friends will be welcomed by the family from 1 – 2 p.m. on Saturday, November 26, 2005, in the New Oakhill Chapel, Plymouth where the Rev. George L. Swank, pastor of Nappanee, will conduct funeral services at 2 p.m.
Burial will be in New Oakhill Cemetery, Plymouth. The Johnson-Danielson Funeral Home, 1110 N. Michigan St., Plymouth, is assisting with arrangements.
Memorial gifts in Les’ memory may be made to a charity of the donor’s choice.