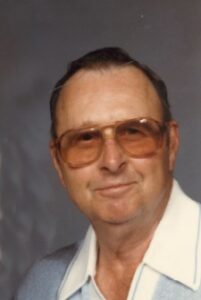 Lester L. Thomas, a longtime resident of 700 Lincoln Street died at 10:05 a.m. in Millers Merry Manor Nursing Home, Plymouth. He had been a resident there for seven years.
Lester was born on November 5, 1921 to Sam and Dessie Davidson Thomas in Plymouth, Indiana. Lester attended Plymouth High School until his junior year when he enlisted in the United States Army. He served three years in World War II, where he was awarded numerous ribbons and three bronze stars. On January 24, 1942 in Plymouth, Lester married Eileen Shearer; she preceded him in death on October 6, 2002. Lester was known by many and disciplined even more. He served the City of Plymouth for over 20 years as a Police officer. He started out as a first class patrolman and worked his way up to sergeant and then later became the Chief of Police, retiring in 1976.
When not working Lester could be found attending Plymouth sporting events with his wife or in a local fishing hole. Lester was an avid reader and enjoyed listening to music. He was a supporter of the Democrat party and a history enthusiast.
Lester was very active in the local community; he was a member of the Plymouth Brethren Church, Plymouth Kilwinning Masonic Lodge, Disabled American Veterans, Plymouth American Legion Post 27, and Plymouth VFW Post 1162, and Fraternal Order of Police Lodge 130.
Survivors include his two daughters; Cheryl S. (Michael) Mertes, Plymouth, Patti A. (Mark) Schutts, Mishawaka; one son; Matthew S. (Stacy) Thomas, Carmel, Indiana and his daughter-in-law, Catherine Foust, Dallas, Texas along with six granddaughters, three grandsons, three great granddaughters, and five great grandsons.
Lester was preceded in death by his parents, his wife, a son, Michael in August of 1969 and three sisters, Wilma, Goldie, Thelma and two brothers Bud and Charles.
A memorial service for Lester will be held at 10:30 A.M. on Tuesday, August 19, 2008 in the Plymouth Church of the Brethren, 1130 North Michigan St. with the Rev. Ruth Yoder and Chaplain Tom Padberg, officiating.
Burial will follow in the New Oakhill Cemetery, with full military burial rites accorded to Lester by the Plymouth American Legion Post 27, and Plymouth VFW Post 1162.
Memorial contributions in Lester’s name may be made to Shop with a Cop or Marshall County Hospice and Palliative Care.