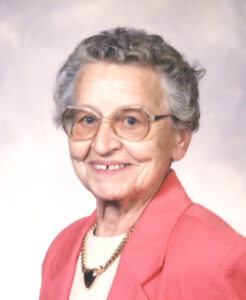 Lila J. “Pearlie” Wallace, 86, a Ferndale Avenue resident of Plymouth, passed away Thursday evening at 5:40 p.m. in the Elkhart Hospice House.
Lila was born on August 6, 1925 in South Bend, Indiana the daughter of Thomas and Eva Jane (Edgerton) Fakos. She graduated from Central High School with the Class of 1943.
On April 28, 1946 in South Bend, she became the bride of Robert J. Wallace. At the age of 40 he preceded her in death on August 27, 1967.
She worked hard to provide for her two sons; Glen and Roger. She worked in the office of I&M Electric and then later over a period of 20 years, sometimes seven days a week, she cleaned for the Plymouth Veterinary Clinic. She loved animals so this was a rewarding task. Lila liked to garden and keep her home and yard in order.
Surviving is her son Glen and his wife Judy of Edwardsburg, Michigan. Her daughter-in-law Joetta Balsley and her husband Greg of Plymouth survives along with three grandchildren; Dawn Wallace of South Bend, Casey Wallace of Plymouth and Kelsey and her husband B.J. Decola of South Bend. Five great-grandchildren also survive. Besides her husband Robert, she was preceded in death by her son Roger “Mooch” Wallace and a grandson Jim Wallace.
Services will be held at 2 p.m. on Wednesday, August 1, 2012 in the Johnson-Danielson Funeral Home, 1100 N. Michigan St. Plymouth with calling beginning at Noon 12 p.m. until time of services. Interment will be at a future date in the Southlawn Cemetery, South Bend.
Memorial gifts may be given to the Marshall County Humane Society, P.O. Box 22, Plymouth, IN 46563.