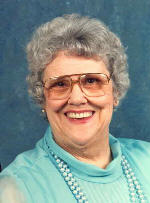 Lillian ‘Bernice’ Miller, 84, died, following an extended illness, at her home, 12403 3A Road, in the loving care of her family and the Marshall County Hospice at 4:48 a.m. on Thursday, March 7, 2002.
Bernice was born in Culver, Ind., on Feb. 7, 1918, the daughter of Charles A. and Hattie C. Schadel Bixel. She graduated from Plymouth High School in the class of 1936.
Bernice lived almost all of her life in Marshall County with the exception of nine years, 1938 to 1947, when she was in the Chicago area.
On Sept. 4, 1938, in the First Methodist Church of Oxford, Ind., Bernice and Eli Miller were married. Eli died on March 19, 2001.
A homemaker, Bernice was a member of the County Line Brethren Church where she headed the nursery and taught Sunday School for 12 years.
She was an avid reader of, among other works, the Bible, and she was a fan of Gospel music. She enjoyed flower gardening, cooking, crocheting and sewing clothes. Traveling and fishing were two of her interests and she and her husband often went south and to Wisconsin.
Times spent with grandkids and the preachers kids were a highlight of her day. Lawrence Welk and Tennessee Ernie Ford brought her much listening enjoyment.
Bernice is survived by two sons and six grandchildren.
They are, her oldest son, Roy A. and Kay Miller, Plymouth, and grandson, David and Marilyn Miller, Mishawaka, and granddaughter, Susan and Jeffrey Peterson, South Bend.
Arthur W. and Elizabeth Miller, Bernice’s second son, are the parents of four children: Michael and Angela Miller, Plymouth; Matthew Miller, Plymouth; Martin and Suzanne Miller, Mishawaka and Michelle Miller, Plymouth.
In addition to several nieces and nephews, five great-granddaughters also survive. They are: Stephanie, Jessica, Lindsey, Jillian and Eve.
Bernice was preceded in death by her parents, her husband and six brothers: Russell, Henry, Cecil, Omer, Ernie and Harold Bixel. Martha Carmean, a sister, has also died.
Visitation with the family will be from 3 to 7 p.m. on Sunday, March 10, 2002, in the Johnson-Danielson Funeral Home, 1100 N. Michigan St., Plymouth, Ind.
Funeral services will be held on Monday, March 11, 2002, at 10:30 a.m. in the funeral home. The Rev. Larry Hanson, pastor of the County Line Brethren Church will officiate.
Burial will be in New Oakhill Cemetery.
Memorial contributions in Bernice’s memory may be made to the or to the Marshall County Hospice or County Line Church of the Brethren.