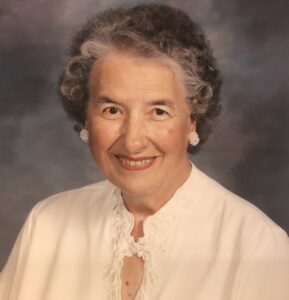 Lillian Maxine Borror Kenney passed away on January 15, 2021, after a brief illness, at Pilgrim Manor Nursing Home in Plymouth, IN. She was 97 years old. Born August 11, 1923, in Muncie Indiana, her parents were Claude Elmore Borror and Dessie Marie (Lett) Borror.

Lillian was proceeded in death by her husband, Henry Clay Kenney, and her stepson, Thomas Kenney, along with her brothers Ray and Harold Borror. She is survived by her four children by first husband Ferry J. Collins: Alpha Maxine Collins, Dr Melanie Ilene Collins, Christopher Lawton (Sharon) Collins, Alan Ray (Becky) Collins, and by her stepdaughter, Martha Bousman, all of Plymouth. She is also survived by sisters Gloria Jean (Burr) Ryan of Marion, IN, and Geraldine Spoonemore of Muncie, IN, as well as brothers Ralph, Norman, and Kenneth Borror. Lillian was blessed with seventeen grandchildren, and twenty-eight great-grandchildren, who treasured their “Grandma Kenney.”

Lillian lived a remarkable life, inspiring and enriching the lives of countless others. A child of the Great Depression, she grew up in poverty, the oldest of eight children. But she was blessed with intelligence and an inner drive for learning and for living her best life. She was valedictorian of her high school graduation class and won a scholarship that allowed her to attend Ball State College (now University). She interrupted her education to marry and have four children but returned to Ball State to earn both her Bachelor of Arts in Education, and a Master of Arts Degree at Ball State. Lillian was an elementary teacher in the Muncie schools, where she won national recognition for a project she developed to introduce the study of Economics to young children and won local recognition for a bicycle safety program she created. After relocating to Plymouth in 1978, Lillian continued her teaching career in the Oregon-Davis elementary school.

While working on her education degrees, Lillian also completed advanced education courses in Religious Studies, and worked for the United Methodist Church in Muncie as their Director of Education. Lillian continued her interest in religious studies after relocating to Plymouth, where she became a valued teacher and church member at the First United Methodist Church. There she served on the board of Love, INC., a community outreach program, and helped start an after-school latch key program for children that was so successful it was expanded and adopted by the Plymouth schools.

When Lillian retired from teaching, she pursued her interest in genealogy and became a beloved mentor to hundreds of other amateur genealogists throughout the United States, to whom she gave generously of her time. She started and edited a national newsletter with subscribers from twenty different states and led efforts to organize regional and national reunions for the Borror family. A plaque in her honor was recently dedicated on a highway in West Virginia where much of her family history began, by distant cousins in her Borror family line. She also discovered fascinating and long-lost history in her mother’s family line.

Lillian was an enthusiastic participant in and supporter of the activities of her children and grandchildren. She attended countless ball games, plays, and recitals. She hosted holiday dinners and parties every Christmas and Easter. Hardly a month went by without a birthday or other holiday event at Grandma Kenney’s house that brought her large extended family together.
Lillian had a special talent for recognizing every child and his or her accomplishments as valued and worthy. She was uniquely accepting and non-judgmental of others and embodied the truest of Christian values: to love your neighbor as you love yourself. She will be lovingly remembered by her family and many friends. The family wishes to thank the nurses and staff at Pilgrim Manor for their kindness and wonderful care of Lillian in her final years.

Due to the covid epidemic, a private family service will be held at Johnson-Danielson Funeral Home, Plymouth on Wednesday, January 20, 2021. Burial will follow in the New Oak Hill Cemetery, Plymouth.