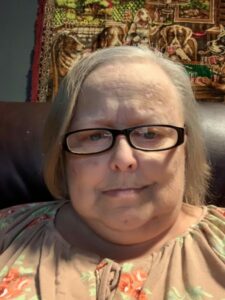 Linda Kay Seeders, 63, of Plymouth passed away at St. Joseph Regional Medical Center in Mishawaka on September 5, 2022. Linda was born in South Bend on February 26, 1959 to Donald Rininger and Carol Sample.

While serving in the United States Army, Linda would marry Terry Seeders on October 31, 1980 in Berlin, Germany. They would go on to have 3 sons: Cory, Jack, and Mark. Terry preceded her in death on May 26, 2007.

Linda worked as an office assistant at Arrow Pest Control in Plymouth for several years. In her free time, she enjoyed reading and coloring. One of her true joys was spending time with her grandchildren.

She is preceded in death by her husband Terry, parents, and sister, Sue Rininger.

A private family celebration will be held at a later date.

Memorial contributions can be made to the Juvenile Diabetes Research Foundation (JDRF), 200 Vesey Street, 28th Floor, New York, NY 10281 or at JDRF.org.