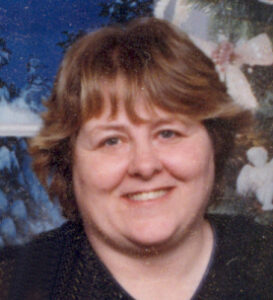 Linda Kay Ward, 46, of 14B Road, Culver, for the past three years, died at 2:08 PM in the St. Joseph Regional Medical Center, Plymouth, from her injuries in a one-car accident on Saturday, February 2, 2013 in Marshall County.
A Marshall County resident most of her lifetime, Linda was born in Goshen, the daughter of Ralph L. and Caroline M. (McNeal) Ward, on March 18, 1966.
Educated at schools in Walkerton and Bremen, she was working to earn her G.E.D. in Culver.
She worked at the Burger King in Knox, the Dairy Queen in Culver, Dean’s Specialty Foods and Pioneer Seed both in Plymouth.
Linda had many interests. She crocheted, collected unicorns, bears and necklaces. She regularly enjoyed jigsaw and word puzzles, computer games and playing Bingo with her Mom.
Devoted to her family, she especially loved being with her children and grandchildren and attending her church, the House of the Lord in Plymouth.
Linda is survived by her mother, Caroline M. Ward of Culver, and her children, four daughters and a son.
Her daughters are Carol, Jessica, Mary and Linda. Her son is Lee of Culver.
Three brothers; Terry L. McNeal and Tony A. (Brenda) McNeal, both of Plymouth, and Ralph L. Ward II, of Culver along with a sister, Brenda L. (John) Bone, of St. Louis, MO., also survive along with five grandchildren.
Beloved pets, Daisy and Ozzy, will also miss their mistress and mourn her passing.
Linda was preceded in death by her father, two sisters: Tammie Adams and Tina Avila, a niece and four nephews. A visitation will be held on Tuesday, February 5, 2013, from 5 to 7 PM (EST) in the Johnson-Danielson Funeral Home, 1100 North Michigan Street, Plymouth.
Funeral services for Linda will follow visitation at 7PM in the funeral home with the Rev. Stephen Patrick, pastor of the House of the Lord, officiating.
Interment will be in the Burr Oak Cemetery.
Memorial gifts in Linda’s memory may be made to the House of the Lord, 16493 Lincoln Highway, Plymouth, IN 46563.