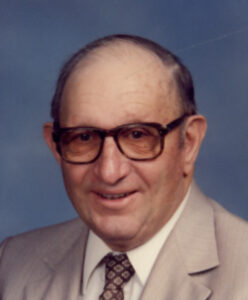 Lloyd A. McFarlin, 89, a lifetime Plymouth – West Township resident, died of natural causes at 2:05 p.m. on Wednesday, July 9, 2008, in Miller’s Merry Manor, 635 Oakhill Ave., Plymouth, Ind.
Born in Plymouth on Sept. 24, 1918, Lloyd was the son of John Lloyd and Lottie (Angler) McFarlin.
He graduated from Plymouth High School with the class of 1937.
A Peach Road dairy farmer for 60 years and a Plymouth Community School bus driver for 23 years, he was a West Township Trustee and on the school organization committee when the schools combined. He was also a member of the Marshall County Farm Bureau.
On February 4, 1940, Lloyd and Carol Louise Hite were married and preceded in death on October 12, 1986.
Lloyd was a song leader at his church, the Trinity United Methodist Church in Plymouth. In his early years, he was in several singing groups: the Singing Bulls, the Marco Mountaineers, the Patrick Gingleheimer and the Barber Pole Cats noted for their renditions of “A Bicycle Built for Two.”
The singers performed for many occasions including entertainment for the Veterans’ Hospital in Muncie.
Lloyd is survived by two sons and a daughter. They are John (Pat) McFarlin, Elkhart, Ind.: Jim (Ricki) McFarlin, Ligonier, Ind., and Ruth (Bill) Stayton, Plymouth, Ind.
Six grandchildren and several great-grandchildren survive as well.
Lloyd was also preceded in death by two grandchildren and one great-grandchild.
Friends are invited by Lloyd’s family to celebrate his life on Sunday, July 13, from 12:30 p.m. to 2 p.m. at the Trinity United Methodist Church, 425 S. Michigan St., Plymouth.
Funeral services for Lloyd will follow the visitation at 2 p.m. in the church officiated by Rev. Kerry O’Brien and Mike Burroughs.
Internment will be in Oakhill Cemetery.
Memorial gifts may be made to the church or the Cystic Fibrosis Foundation.