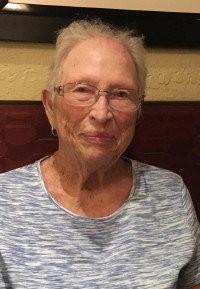 Lois Fay Lawrence went to be with the Lord after living on this earth for 90 years, 9 months, 9 days and 9 hours. She was surrounded by her loving family when she passed away at 8:20 p.m. on October 12, 2019 at her home in Plymouth, Indiana.
Born in Phoenix, Arizona on January 3, 1929, she was a treasured daughter of Matt McDowell and Elizabeth (Hill) Hedgpeth. She was the third oldest of seven Hedgpeth children. Growing up she shared her childhood with three sisters: Prudence, Virginia and Nancy, and three brothers: Larry, Jay and Jerry.
On April 21, 1951, Fay married the love of her life, Kenneth L. Lawrence in Phoenix, Arizona. They shared 65 years of life’s adventures. Ken and Fay began their life together in Phoenix but soon moved to Anaheim, CA where they remained until they retired. They then followed their dream by moving to Prescott Valley, Arizona and built what their kids referred to as “the big house”. After Ken’s death, Fay relocated to Plymouth, Indiana to be closer to her grandchildren and great grandchildren.
Left to cherish Fay’s memory are her daughters, Janet (Michael) Marshall, Susan (Roy) Strong & Tracy (Michael) Huffaker; five grandchildren, Michelle (Adam) Gourley, Phillip (Ashley Hnatusko) Marshall, Clayton (Allison Jones) Marshall, Russell Ficke, & Douglas Ficke; four great grandchildren, Adalynn Gourley, Lilly Gourley, Owen Gourley, and Matthias Ficke; her only living sibling, Jay Hedgpeth; and many nieces and nephews.
She was preceded in death by her loving husband, Kenneth in 2016; her sisters, brothers and parents.
For her Indiana family and friends, a Celebration of Life will be held on Friday, October 25, 2019 at her grandsonâ€™s home in Plymouth from 4-8 p.m. For her Arizona family and friends, a Celebration of Life will be Wednesday November 6, 2019 at 5:00 p.m. at the Mountain Valley Church of God in Prescott Valley. Burial will be in the Prescott National Cemetery where she will be reunited with her devoted husband, Ken.
Memorial contributions can be made to the Wounded Warrior Project, P.O. Box 758516, Topeka, Kansas 66675-8516 or United Service Organizations, Inc. (USO) P.O. Box 96860, Washington, DC 20077-7677.