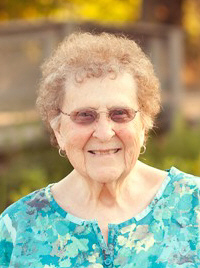 Longtime Plymouth resident, Lois Jean Webster, 87, passed away following a brief illness on Wednesday afternoon in the St. Vincent Hospice in Indianapolis with her family at her side.
With Jeanâ€™s sudden passing, her family would like to express on her and their behalf the appreciation of knowing that she has had the comforting support of caring neighbors, friends, Plymouth E.M.S., St. Joseph Regional Medical Center, and especially Dr. Holm and the staff of the Holm Medical Clinic.
Jean was born the daughter of Albert and Sarah B. (Kuhns) Cook in Walton, Indiana on June 11, 1929. She was raised there and graduated in 1947 with a class of nine. In her youth she played piano at her familyâ€™s place of worship.
She then met John Robert Webster and the couple was married in Logansport, Indiana on May 14, 1949, and they made Plymouth their home. Bob had preceded her in death on December 27, 2002.
For many years, Jean had the position of Student Loan Officer with the State Exchange Bank, serving the branches in Plymouth, Culver, Argos and LaPaz and retired from NorCen Bank.
Jean’s grandchildren and great-grandchildren were the light of her life. She enjoyed reading, calligraphy, maintaining her home, frequenting the public library and following Purdue football and basketball.
She was a longtime member of the First United Methodist Church in Plymouth and was involved with the Marshall County Historical Society and Museum.
Surviving are family members: her son Gary L. and wife Louise (Houin) Webster of Noblesville, Indiana and her four grandchildrenâ€™s families including five great-grandchildren. They are: Dr. Emily (Marc) Szewczyk of Westfield, Indiana and their children, Paul, Evan and Sam; Lisa (Ryan) Moore of Lakeland, Florida and their children, Mason and Kendal; Erin (Brandon) Webster Weir of Indianapolis, Indiana; and Joseph (Tracy) Webster of Zionsville, Indiana. She is also survived by a sister-in-law Doris Cook of Greensburg, Indiana and numerous nieces and nephews.
Preceding her in death were her spouse and three brothers: Herbert Cook, Forrest Gail Cook and Eldon Lee Cook. Visitation will be held on Saturday, January 28th from 11 a.m.-1 p.m. in the Johnson-Danielson Funeral Home 1100 N. Michigan St., Plymouth where services will begin at 1 p.m. with the Rev. Charles Krieg officiating.
Burial will take place immediately following in the New Oak Hill Cemetery, Plymouth.
Memorial gifts may be made to the Marshall County Historical Society 123 N. Michigan St., Plymouth, IN 46563 or the Center for Hospice Care 112 S. Center St., Plymouth, IN 46563.