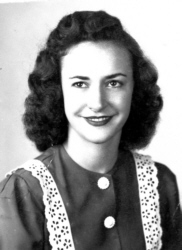 Lola Joy (Kozuch) Wright, 78, a resident in River Park for 10 years, died in Saint Joseph Regional Medical Center, Plymouth, following a brief illness, at 7:35 a.m. on Wednesday, April 18, 2007.
Lola was born in Goodland, Ind., on May 4, 1928. She was the daughter of Charles F. and Bertha M. (Peck) Heilman. She graduated from Goodland High School with the class of 1946.
She was first married, in Kentland, Ind., to John J. Kozuch on April 26, 1947. John died on March 25, 1988. She then married Lonnie L. Wright, in Plymouth, on October 26, 1991. Lonnie died on April 12, 2000.
Lola worked for the Sears & Roebuck Co. in South Bend, in Plymouth she was employed by Montgomery Ward and then retired in the early 1990’s from the Plymouth Sears Store.
She loved to cook, read and work crossword puzzles. Her grandchildren and great-grandchildren were very special to her. She enjoyed baking them cookies and going on bike rides.
While residing in South Bend, she was a member of St. Paul’s Memorial Methodist Church for many years. She was a former member of the Plymouth Women of the Moose and V.F.W. Auxiliary.
Lola is survived by a daughter, two sons, a step-son and families.
Her daughter is Kathryn A. (Donald R.) Coleman, Lakeville, and their two children, Caren A. Dove and Ronald R. Coleman. Her son, Joseph J. (Debbie A.) Kozuch and their daughter Jessica E. Kozuch, live in Cary, N.C. and son, Mark E. Kozuch of Plymouth and his sons, William and James.
Step-son, Lonnie A. and his wife, Linda, Wright, live in The Dalles, Oregeon with children, Lonnie L. and Sierra Rose Wright.
Nine great-grandchildren survive as well, together with a brother, Raymond (Sandra) Heilman, South Bend, Ind., a brother-in-law, Robert Scheiwe, Trenton, Mich.; a sister-in-law, Sally Heilman, South Bend, and numerous nieces and nephews.
Lola was preceded in death by her husbands and a son, Timothy A. Kozuch, who died in January of 1993. Three sisters, Ruth A. Dye, Martha A. Scheiwe and Rosalie Heilman and a brother, Charles J. Heilman, have also died.
Friends are invited to celebrate Lola’s life on Friday, April 20, 2007, from 5 to 8 p.m. in the Johnson-Danielson Funeral Home, 1100 N. Michigan St., Plymouth.
Funeral services for Lola will be at 10 a.m. on Saturday, April 21, 2007, in the funeral home. The Rev. Les Johnson, a chaplain at St. Joseph Regional Medical Center will officiate.
Internment will be in New Oakhill Cemetery, Plymouth.
In lieu of flowers, the family requests that memorial gifts be made to the American Diabetes Association, 30 N. Michigan Ave., Suite 2015, Chicago, Ill. 60602 or the Marshall County Neighborhood Center, 402 W. Garro St., Plymouth, Ind. 46563.